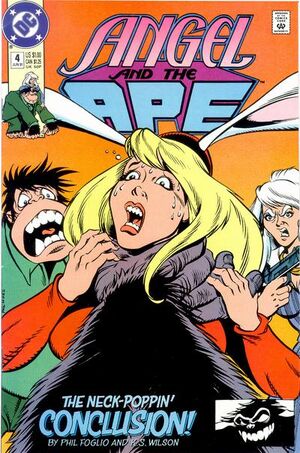 Sam agrees to use the Green Glob if Grodd agrees to change his friends back to humans and allows Sam to use it to strip Grodd of his powers. Grodd does change the gorillas back to humans and Dumb Bunny immediately attacks Grodd. Grodd snaps her neck and uses his mental powers to knock the other humans unconcious. Grodd tells Sam he can save her by using the Glob to permanently change reality and Sam realizes he now has no choice. Sam makes mental contact with the Glob and learns it is a teaching machine created by the Guardians of the Universe that temporarily warps reality as a teaching tool. Grodd has been monitoring but has not seen anything the machine has shown Sam causing Sam to realize the machine has a measure of intelligence. Grodd attempts to force Sam to use the machine but is interrupted when the security measures alert him to attackers outside. It's the disguised gorillas from Gorilla City. Awkward Man and Blimp, who'd been waiting on the roof to guide them, accidentally knock over a water tower leading the gorillas to think they're under attack and begin shooting at them. Grodd calls the police to stall them while using a device to deactivate the gorrilas' disguises. Meanwhile Angel, White Feather and Merryman discuss their situation and Merryman reveals to the group that he loves Dumb Bunny who reveals that she's not dead, but is paralyzed. Angel realizes that Dumb Bunny's involuntary nervous system is still functional and arranges for her superstrength knee-kick reflex to knock a hole in the wall. Angel fights with Grodd giving Sam a chance to deal with the machine unmonitored. Sam uses the machine to temporarily increase his own mental powers to plant an insatiable junkfood craving in Grodd who rushes out of the warehouse where the police catch him. Sam uses the machine to temporarily restore Dumb Bunny's condition but the machine tells Sam its programming requires all changes to be undone once the lessons have been learned. Sam states that he wants to learn what effect permanently changing reality will do to the machine. The machine accepts this and makes the change permanent which causes the machine to transcend it's programming and become free disappearing to parts unknown.

Retrieved from "https://heykidscomics.fandom.com/wiki/Angel_and_the_Ape_Vol_2_4?oldid=1531078"
Community content is available under CC-BY-SA unless otherwise noted.