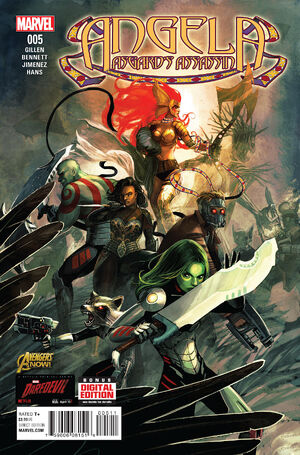 • Superheroic to-do lists are quite the thing. Today, Angela’s read “INVADE MY HOMELAND, WHILST PURSUED BY ASGARDIANS, CARRYING A DEMONIC CHILD WITH ONLY MY SARCASTIC SPACE FRIENDS FOR COMPANY.”

• What will Starlord do when he discovers that Belinda Carlisle has totally lied to him? BECAUSE HEVEN IS A PLACE FULL OF ANGELS OUT TO KILL HIM.

Retrieved from "https://heykidscomics.fandom.com/wiki/Angela:_Asgard%27s_Assassin_Vol_1_5?oldid=1649933"
Community content is available under CC-BY-SA unless otherwise noted.