Animal Man: The Hunt is an Animal Man storyline published as part of The New 52. Following the timeline reboot in Flashpoint, it establishes his continuity in the DCnU. It's the debut arc of Jeff Lemire and Travel Foreman on their all-new [[A 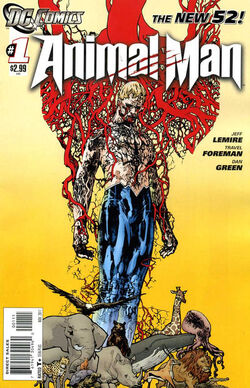 Animal Man: The Hunt is an Animal Man storyline published as part of The New 52. Following the timeline reboot in Flashpoint, it establishes his continuity in the DCnU. It's the debut arc of Jeff Lemire and Travel Foreman on their all-new Animal Man volume, taking a more horror-driven direction on the character than previous writers.

Animal Man struggles with his political identity in a world where he's famous as super-hero, actor, and animal rights activist. During a routine hostage situation with the mentally ill Lyle Edwin, he feels his connection to the Morphogenetic Field grow stronger than ever before, but he is horrified when his eyes begin to bleed. Returning home to his wife and kids, he has a horrible dream where they are pursued by the Hunters Three, and that they are somehow connected with his daughter Maxine and something called The Red. He is wakened from this nightmare by his wife Ellen's calls. In little Maxine's desperation for a pet, she had somehow managed to reanimate several of the neighbourhood's dead pets, using hitherto unseen powers.[1]

Maxine mentions that she had heard the animals calling her from somewhere called the Red place, and Buddy suddenly becomes covered in what looks like blood again. Maxine explains that it's actually a tattooed map to The Red. Despite Ellen's belief that it would be too dangerous, Buddy sets out on an adventure with his daughter to find the Red and discover the source of their problems. Maxine seems to have a strange knowledge about the place, suggesting that she has powers greater than his own. Meanwhile, The Hunters Three appear in the real world and begin to track them down after eating all of the people at the San Diego zoo.[2]

Inside the Red, Buddy and Maxine meet the Parliament of Limbs, former avatars of the Red - the force of life which pervades all animal beings. The Parliament exists to provide wisdom to the current avatar. They explain, however, that Animal Man was never meant to be their avatar. They had engineered his origins and gave him minor powers so that he could protect the real avatar: Maxine. She must be prepared for an upcoming conflict between the Red and the Green against a third force known as The Rot - the force of decay and death.

Unbeknownst to Buddy, two of the Hunters have followed them into the Red and attack. The third stays behind to hunt down Ellen and Cliff, using the guise of a trusted police detective.[3] Maxine uses her superior power to save her father from being killed by the Hunters, and the Parliament sends them back to the real world with a former avatar named Ignatius to guide them in the trials to come.

Ellen and Cliff take refuge with her mother Mary to escape the monster, but they find that it has followed them and killed Detective Krenshaw.[4] With Maxine and Buddy's return, the family is reunited, and Buddy decides to face the final Hunter alone. Maxine intervenes in an attempt to save him, but she is tricked, and her actions allow the Rot to affect everything in the lifeweb.

The family is chased to their car by ravenous infected animals and Ignatius (since forced to take his original feline name of 'Socks') explains that the Rot will spread like a plague into anything it meets. Forced to go on the run in their RV, the only person alive who can help them is the Swamp Thing in Louisiana.[5]

While on the road, Cliff watches his dad's most recent movie Tights on his smartphone. The movie is about a pathetic has-been super-hero whose family struggle to deal with the danger he places himself in.[6]

Retrieved from "https://heykidscomics.fandom.com/wiki/Animal_Man:_The_Hunt?oldid=1501310"
Community content is available under CC-BY-SA unless otherwise noted.