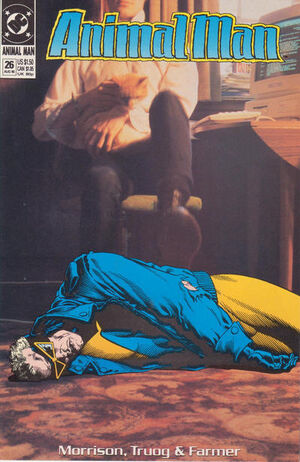 This is my last story. I'm sorry it's all been such an anticlimax, but this is as far as I can take you. No explosions, no big revelations. A whimper rather than a bang.

Grant Morrison invites Animal Man into his home, where they discuss the nature of Buddy's existence. Grant explains that he controls every aspect of Animal Man's life, showing him the comics he's written.
Buddy becomes angry, knowing that Grant Morrison is responsible for the death of his family. The writer is remorseless, noting that the drama of the story makes the comic more realistic.
They go for a walk, where Grant explains that the real world is far more bleak than the comic book reality, and that he has used the comic as a mouthpiece for his own concerns about animal rights.
Eventually, Grant reveals that this will be his last issue of Animal Man, and that there will be a new writer soon - a new write who might make dramatic changes to Buddy's character. Buddy is incredulous, demanding that Morrison bring back his family. The writer simply comments that the discussion has become boring, and provides Buddy with some villains to fight as a distraction.
Morrison takes the opportunity to thank the editors and artists who helped make the book what it is, and names some specific readers who wrote in, and inspired him. Meanwhile, Buddy is soundly defeated by the villains, and lies in a pool of blood behind his writer.
Morrison notes that it's only a comic, and Buddy is actually alright. Before leaving, he seems to have a sudden change of heart about Buddy's family, and as he disappears from the page, he tells Animal Man to forget they ever met.
Suddenly, Buddy is home, his family is alive and well, and he cries tears of joy.
Morrison is unsatisfied with the ending, and adds a short story about his childhood imaginary friend Foxy as a form of denouement.

Retrieved from "https://heykidscomics.fandom.com/wiki/Animal_Man_Vol_1_26?oldid=1409311"
Community content is available under CC-BY-SA unless otherwise noted.