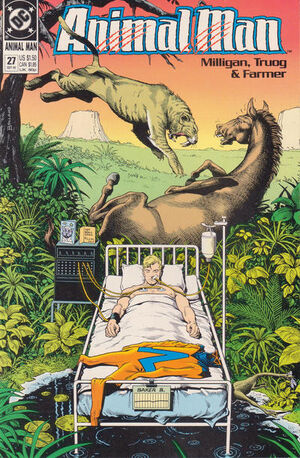 Kids were having breakfast when I got up. I ate some too, then regurgitated it all over them. Seemed the natural thing to do at the time. Ellen and the kids didn't think so...

Appearing in "The Coma Kid"Edit

Synopsis for "The Coma Kid"Edit

Buddy Baker has an extremely vivid dream of a tiger attacking a wild horse. Eventually, he wakes to find himself in a hospital bed, having apparently been in a coma for three months.
The doctor and nurses are oddly patronizing, and when his wife Ellen visits, she seems changed. She dresses and acts differently, smoking, and mentioning that her mother is dead. Buddy has no memories of these things. When Ellen leaves, Buddy glimpses a strange ape-like man standing over him, but believes it is a hallucination.
When Buddy gets home, his children seem to have grown. Cliff seems welcoming, but Maxine is off-puttingly shy and withdrawn for some reason. At night, Ellen feigns sleep, to Buddy's discomfort. She is cold, and her sex-drive seems low.
The next day, Ellen announces that she has important, wealthy guests coming to visit, and pushes Buddy to make himself presentable. However, Buddy is plagued by strange hallucinations of a jungle inside his bathroom. He heads out to the front yard, wondering about the changes he perceives in his family. When he turns around, his family is enraged to discover that he has, in fact, just urinated on the sidewalk in front of their home. At first, Buddy rationalizes it as territory marking, but eventually realizes that his behaviour is strange.
Later, when the guests arrive, Buddy embarrasses himself and his family by sniffing their butts like a dog. He winds up getting drunk at a bar and sleeping on the couch on his second night out of the hospital. That night, Maxine creeps down the stairs and finds the couch empty, and meets the strange beast-man from before. She asks if he will make her Daddy go back to normal.
Buddy finds himself in the zoo in his underwear. He floats down to an ostrich pen, where he becomes fascinated with the idea of squeezing the bird. He is interrupted by two policemen, who accuse him of untoward acts. He absorbs the power of a flea to leap away, but begins hallucinating the his pursuers as warthogs. Seeing himself as an ape-man, Buddy beats the policemen savagely with a stick.
The next day, Buddy appears as Animal Man at an animal rights and environmentalism rally. He is unsure of what actually occurred the previous night, and hopes to suppress his strange animal behaviours. A mounted police officer offers to lead Animal Man through the crowd to the stage. Suddenly, the horse panics, and Buddy instinctively gives chase. He imagines himself as a tiger, and bites through the horse's neck.
Buddy soon realizes that he has just brutally murdered a horse with his teeth, on stage in front of hundreds of animal rights activists...

Retrieved from "https://heykidscomics.fandom.com/wiki/Animal_Man_Vol_1_27?oldid=1409312"
Community content is available under CC-BY-SA unless otherwise noted.