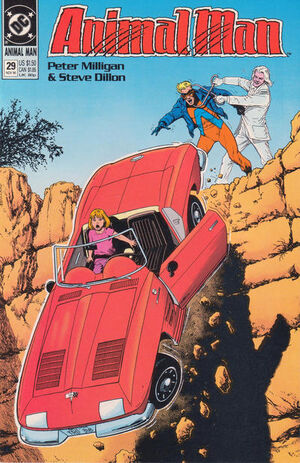 You went into the hospital the old daddy and you came out the new daddy and that funny old monkey man keeps following you around and sometimes there's trees in the bathroom. When are we going to see mommy?

Appearing in "Born To Be Wild"Edit

Synopsis for "Born To Be Wild"Edit

The Notional Man observes the destruction he caused to a San Diego nightclub. He had left a bomb there in hopes of killing Animal Man as revenge for the death of his partner, The Front Page.
Buddy is alive, but he can do little to save any of the other patrons. His erstwhile partner, Nowhere Man presses him to seek medical attention, but Buddy refuses. Even so, Nowhere Man convinces him to return to their hotel room to regroup. The next morning, Buddy calls his wife Ellen, who reveals that due to his recent behaviour, she got a court order denying him communication with his children until their divorce is settled.
Frustrated, Buddy pulls his children, Cliff and Maxine out of school, despite her protests and those of a security guard. Buddy and his children get into a car, and drive for hours. Unbeknownst to Buddy, The Notional Man follows.
With Buddy gone, Nowhere Man comes under fire from the CIA, who claim that without Animal Man's cooperation, they will both go to prison.
Buddy and the kids visit the Grand Canyon, where Maxine asks when they're going home. Buddy tries to sound reassuring, but Maxine states that he is not their real father. She says that he had been her real father until he went into a coma, but after he awoke, he was different. She reveals that she has also seen the strange monkey man, and the visions of a jungle in the bathroom that Buddy has seen.
Buddy calls Ellen to let her know the kids are alright, but when he sees a man talking to the kids from the phone booth, he becomes like a predator and attacks him. Cliff stops him, and the man escapes, with Buddy feeling more confused by his uncontrollable urges.
Driving again, Buddy sees the strange monkey-man writhing in pain in the middle of the road, and stops the car to check it out. He realizes that the kids can see it too, and it is no hallucination. Touching it, his senses are overloaded with the cosmic hum of the animal universe.
He stops at a hotel, and as he contemplates his predicament, Cliff states that he heard a knock at the door. When Buddy investigates, he finds a newspaper headline claiming that the Notional Man has claimed revenge. Buddy realizes that Maxine has been kidnapped, and flies over the countryside, hoping to find his daughter.
Buddy sights his car balanced on the edge of the Grand Canyon, with Maxine in the backseat. Notional Man threatens that unless Buddy cuts himself open with surgical instruments, he will push the car over the precipice. Buddy complies, slicing his chest and stomach open with a scalpel. Knowing that the torture will continue until he is dead, Buddy throws a surgical instrument at the Notional Man, who sets the car into motion. Buddy leaps to stop the car from falling, but the back bumper rips off in his hands, and the car crashes to the ground below.
Buddy watches the car explode in horror, and the Notional Man grips him by the neck in his forceps. Unable to free himself, Buddy reaches out for a creature of fierce love, and animal hatred. He envisions himself as an ape, and tears through the Notional Man's arm with one blow, and decapitated him with the next.
Fortunately, Maxine appears to have survived, and as he carries her away, he apologizes to her for taking her away, realizing that he needs to deal with his issues on his own. Maxine states that she thinks she might like him better than her real dad.
As Buddy drives the kids home, he stops the car outside a church, and prays to have things returned to normal. He notices blood dripping from the ceiling, and soon, a body falls through the stained glass roof. The body is that of Animal Man.

Retrieved from "https://heykidscomics.fandom.com/wiki/Animal_Man_Vol_1_29?oldid=1409314"
Community content is available under CC-BY-SA unless otherwise noted.