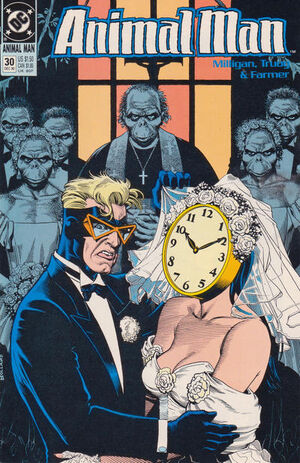 Appearing in "A Nice Day for a Weird Wedding"Edit

Synopsis for "A Nice Day for a Weird Wedding"Edit

After experiencing a surreal vision, Animal Man runs out of a church to find Nowhere Man and two CIA agents, Jones and Kinnock waiting for him. They explain that he has been under the influence of the Angel Mob, three siblings with mental powers. It soon becomes clear, however, that Nowhere Man and the CIA agents are visions themselves, as the real trio appears later.
Jones explains that even Batman has faced the Angel Mob and lost. He reveals that the reason they need Animal Man and Nowhere Man to protect the president is because they have had more success fighting the Angel Mob with heroes who are mentally unstable.
At night, Buddy sneaks into his own home, having begrudgingly returned his children Cliff and Maxine to their mother Ellen. He opens the bathroom door several times, hoping to see the vision of a jungle he had seen there before. When it appears, he enters, seeing a number of ape-men. He sees a sign saying "Stay there, Buddy. Back Soon. PS Careful Danger." He saves a baby ape-man from a tiger, and has a strangely familiar interaction with its mother before being chased back out of the bathroom by the father.
In the hallway, Buddy finds himself face to face with Ellen, who has a rifle aimed at him. He says he still loves her, but she transforms into Lucinda Angel, the creator of his visions. She professes love for him, and offers to explain the jungle vision if he kisses her. Before he can kiss her, the real Ellen wakes up, and asks him to leave.
Buddy and Nowhere man liaise with the president in San Francisco. While riding with him in a motorcade, Buddy notices Mark Angel on a nearby roof, and attacks. Unfortunately, Mark is too strong, and Animal Man appears to be impaled and killed by a shard of glass.

Retrieved from "https://heykidscomics.fandom.com/wiki/Animal_Man_Vol_1_30?oldid=1409315"
Community content is available under CC-BY-SA unless otherwise noted.