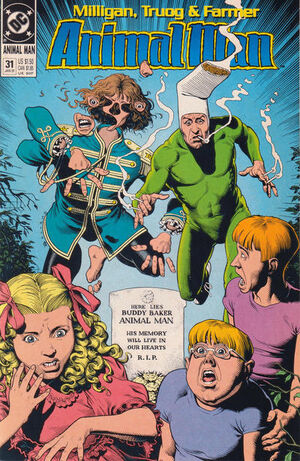 Yes, it was the real Buddy. But I'm the real Buddy too. Can we go through this later? We can't have me being seen at my own funeral...

Appearing in "Rites of Passage"Edit

Synopsis for "Rites of Passage"Edit

Nowhere Man is distraught when his partner Animal Man is killed by one of the Angel Mob. Agent Jones of the CIA seems unconcerned. Meanwhile, Lucinda Angel, who had a crush on Buddy is angry with her brother Mark for having killed Animal Man.
Buddy's wife Ellen insists that his funeral be held somewhere other than Arlington cemetery. Nowhere Man attempts to reach out to Ellen and the kids, but she turns away from him. Even so, Buddy's daughter Maxine pays him some attention. He asks her whether the strange jungle that Buddy found is still appearing in the bathroom. Before being dragged away, she responds that it is still there, sometimes. Somewhat insensitively, Agent Jones introduces Nowhere Man to his new partner, the Green Cigarette, at the funeral.
Nowhere Man goes to the Baker home and sneaks upstairs. He stumbles into Cliff's room, and tries to comfort him about his father's death. He then meets with Maxine and asks her to help him find the jungle in the bathroom. After several attempts, the jungle finally appears, and Nowhere Man enters. After some close calls with a sabre-toothed tiger, Nowhere Man is surprised to find himself face to face with Buddy Baker, alive and well.
After explaining how he cheated death, Buddy explains that he has to find Lucinda Angel, to help set things back to normal. Buddy hints that he has had visitors from the future, that the jungle is 2 million years old, and that he has met with other versions of himself there. Before returning to the present, Buddy grabs a sack full of items left by the visitors from the future.
At one of President Eagleton's rallies, he is suddenly attacked by Matthew Angel's psi powers. Agent Jones and Agent Kinnock order a group of psychics to counter Matthew's powers. Once the President's pain is reduced, though, he suddenly finds himself flying through the air, dragging Nowhere Man and the Green Cigarette behind him. Unseen, Buddy follows along behind them.
The Angel siblings dump the president at their feet, and are forced into a struggle with the two heroes. The action is interrupted by Buddy, who begs for a chance to meet alone with Lucinda before taking the President and Nowhere Man to safety.
Buddy reiterates that he needs Lucinda to be able to disappear, and as such, his family cannot be notified that he is alive. The President forces Buddy to try to convince Lucinda and her brothers to turn themselves in, promising that he will treat them well. He gives his word.
Buddy and Lucinda meet on a tour bus, and she is surprisingly receptive to the idea of turning herself in. Later, she and her brothers meet Buddy in an abandoned warehouse. Unfortunately, the President goes back on his word, and violently captures the Angel children. Buddy is enraged, and the President is unrepentant.

Retrieved from "https://heykidscomics.fandom.com/wiki/Animal_Man_Vol_1_31?oldid=1409316"
Community content is available under CC-BY-SA unless otherwise noted.