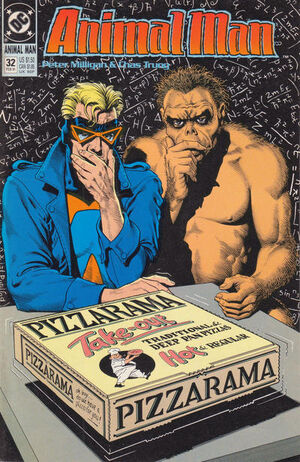 When President Eagleton reveals that he had never planned on letting the Angel Mob go free, and orders that the three children be dissected and tested for psychic weaponization, Buddy Baker is overcome by primal rage and snaps the president's neck. The move forces the accompanying CIA Agent Jones to open fire on him, and in an attempt to escape, he leaps through a window near the roof of the warehouse and slams straight into a brick wall.
Buddy wakes in a hotel room with his partner Nowhere Man standing over him. Buddy has been unconscious for three days, and he is too late to save the Angel Mob from their fate at the research centre. They decide to waste time by having Buddy retell how he came to cheat death.
Buddy tells the story of how people from the future had visited prehistoric ape-men, but they had come into conflict, and as the future men escaped, one of the ape-men became trapped in the time-door. This ape was Buddy's ancestor, and the result of his being trapped in the time door put a prehistoric jungle inside Buddy's bathroom. Buddy's powers were also affected.
Buddy was able to cheat death because of a quantum mechanical anomaly explained by the Schroedinger's Cat paradox, and the Many-worlds interpretation thereof. For every possibility that could occur, there is a new world with a new Buddy in it. Buddy realizes that some event in his recent past sent him into the wrong world after waking from a coma. As such, in each world, a Buddy awakes from his coma, dies, and then wakes up in yet another 'wrong' world.
After all this, Buddy and Nowhere Man receive a message from Lucinda Angel, begging for help, and they set out to find her. They sneak into the research facility, but when they find the Angel children, they are too late to save them from having been abused and cut up. Only Lucinda remains lucid, with tubes running into her skull. Lucinda agrees to help Buddy get out of his closed loop by implanting a memory trigger that would bring back his memories of this world as soon as he is next reborn from the coma, hopefully jarring him into the proper reality.
In return for helping him, Lucinda asks only that he remove the tubes from her body, and allow that she and her brothers be able to die on their own terms. Buddy leaves, with Nowhere Man staying behind for a while. When Nowhere Man emerges, the building explodes with the Angel children inside. Buddy states that he must return to the jungle in his bathroom by himself, and that he will not likely meet Nowhere Man again. Nowhere Man reveals that Lucinda had found a way to correct his displaced speech. The two embrace as friends before Buddy leaves.
Buddy returns to his home, enters the bathroom and the jungle within it. He pulls his ancestor from the time-door, and then leaps to his death from a high cliff.
Buddy wakes from his coma again, but when the trigger words "Mister Baker" are said, he remembers his previous life, and finds himself surrounded by his real family, from his proper reality. Buddy's doctor suggests that the coma was caused by a traumatic revelation. Finally convinced that he is back safe with his real family, Buddy has them order a pizza for him.

Retrieved from "https://heykidscomics.fandom.com/wiki/Animal_Man_Vol_1_32?oldid=1517987"
Community content is available under CC-BY-SA unless otherwise noted.