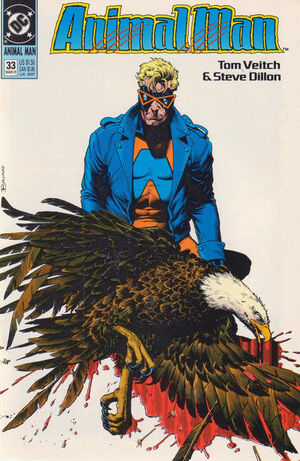 Do you really know what it's like to confront the beast that's hidden in the human soul? Listen Ellen... your husband is a man of deep ungodly powers! Can you understand?

Appearing in "I am the Man of Deep Ungodly Powers"Edit

Synopsis for "I am the Man of Deep Ungodly Powers"Edit

After a month out of the hospital since waking from a coma, Animal Man is now doing work on film sets as a stunt man, using his powers to survive dangerous scenarios. Buddy has been stalked recently, and the appearances of dead eagles in strange places have put him ill at ease.
While flying home from a film shoot with his son Cliff strapped to his back, a mysterious figure begins shooting arrows at them. Buddy is careless in his pursuit, and Cliff ends up with an arrow in his side. The doctor at the hospital says that Cliff will be alright, and that he can go home.
The Baker family packs into their car, with Maxine riding in her father's lap at the wheel. His wife Ellen wonders if it was wise to carry Cliff all that way, and Buddy is indignant. Before the argument comes to a head, Buddy notices the man he thinks shot Cliff, and stops the car. The man denies any involvement, but says that he knows Animal Man, and that he is an agent of higher powers. Buddy is still angry, and takes the man in to the San Diego police. Buddy finds out that the man's name is Travis Cody, and that he lives nearby in a ramshackle house. Still the police found no evidence that he was the archer.
That night, Buddy and Ellen lie in bed, but when things become intimate, he acts strangely and it frightens her. Her reaction sends Buddy on a flashback to his previous life, when he was overcome by atavistic urges, and his wife was unforgiving. Buddy is too defensive when she tries to commiserate, and she asks him to sleep on the couch.
The next morning, Buddy has been working on the case of the mysterious endangered bird species' corpses that he has been seeing. He discovers that the birds have been cooked from the inside, and imagines that the culprit has a microwave gun. He finds a message on his answering machine from the Game Warden's office indicating that they have found three dead osprey, and Buddy goes to investigate.
Buddy meets Dwayne Brown of the Warden's office, who notes that the ospreys' internals had also been cooked. When Buddy asks about Travis Cody, Dwayne mentions that Cody had actually been begging them to investigate Animal Man. Buddy supposes that Cody has been using the strange inventions he's created to kill the birds. Unseen by Buddy and Dwayne, an invisible figure approaches as Buddy notices the smell of Ozone.
Suddenly, Buddy is attacked by a wolverine. Unable to defeat it on his own steam, he taps into the wolverine's powers, and kills it in self defence. Unfortunately, he can't seem to shut the powers off...

Retrieved from "https://heykidscomics.fandom.com/wiki/Animal_Man_Vol_1_33?oldid=1409318"
Community content is available under CC-BY-SA unless otherwise noted.