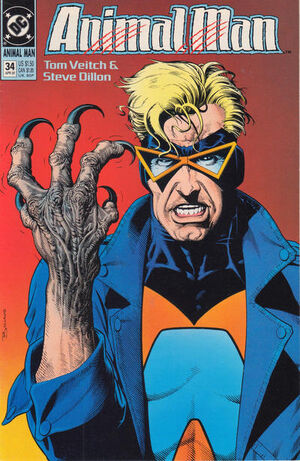 Appearing in "Requiem for a Bird of Prey"Edit

Synopsis for "Requiem for a Bird of Prey"Edit

Ellen Baker is horrified to discover her daughter Maxine savagely ripping her stuffed toys to shreds with her teeth like an animal. Soon afterwards, Animal Man returns home from an investigation with an unusual disfigurement of his hand: it has taken the appearance of a wolverine's claws. Ellen is surprised and disgusted by Buddy's hand, but he hopes it isn't permanent. Ellen explains that she is already on edge because of Maxine's behaviour.
While Buddy examines his daughter, Cliff Baker discovers a dead owl nailed to the door of their house. Ellen's reactions and his own anger over the dead creature lead Buddy to lose his temper, but he is distracted from his tirade because Maxine has taken to howling forlornly like a wolf. He decides that he needs to calm down, for her sake.
That night, at dinner, Buddy's temper seems unusually volatile, and when Cliff reveals that he saw Travis Cody with a bag of dead birds, he gets up and leaves, with his family confounded at the dinner table. Buddy absorbs powers from some rats, and sneaks into Travis's house. Travis still accuses Buddy of being the one who kills the birds, and eventually knocks him unconscious with a wrench.
As Buddy lies unconscious, an invisible entity stands over him. When he awakes, his wolverine claw has disappeared, but his rat powers remain. When he returns home, Ellen begs him to do something about Maxine, who has surrounded herself with rats, calling them her friends. Buddy realizes that Maxine's behaviour is somehow his fault, and as the rat powers leave his body, Maxine regains full consciousness, and becomes terrified of the rodents. As he removes the rats, Ellen suggests that she and Maxine leave town for a while, but Buddy begs them for a few days to sort it out.
Animal Man has Travis arrested, and soars off, flying. While in the air, an eagle attacks him. Buddy is confused by the eagle's behaviour, and is even further surprised when his power causes the eagle to simply explode. He follows the eagle's companion to its nest, but it also attacks him. His powers take control, and the mother eagle dies. Buddy realizes that every time he flies, a bird dies, and he swears never to fly again.

Retrieved from "https://heykidscomics.fandom.com/wiki/Animal_Man_Vol_1_34?oldid=1409319"
Community content is available under CC-BY-SA unless otherwise noted.