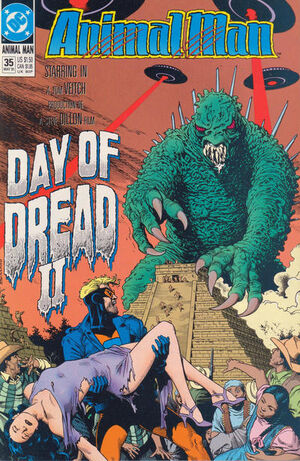 It's funny... the link is definitely degrading... I can feel it... It's not just the bird power... The whole connection to the field is breaking down. There's confusion... like something is getting in the way... a strange presence...

Appearing in "Dead Dogs on Ice!"Edit

Synopsis for "Dead Dogs on Ice!"Edit

At S.T.A.R. Labs, Buck Samson and a coworker discuss their efforts to create a mutant, and their plans to use Native American lands as a dump site for radioactive waste.
In San Diego, Animal Man notices that a small pack of neighbourhood dogs is following him around inexplicably. Knowing that if he uses his power to fly, birds will die as a result, Animal Man is restricted to walking. But, when a dragonfly lands on his finger, he realizes that he doesn't need bird power to fly. However, once he's up in the air, a nearby robin eats the dragonfly, and he falls to the ground.
Animal Man visits Travis Cody, who he had originally suspected of killing the birds. Travis has developed a device by which he can measure Animal Man's powers, and see what is affecting his connection to the morphogenetic field. Animal Man is reluctant to work with the man who shot an arrow into his son Cliff's side, but when Travis notes that when Animal Man uses his bird powers, that he doesn't have to flap, he is convinced that the hippy engineer may be on to something.
Buddy brings Travis to his home, where his wife Ellen reminds him that he was called by S.T.A.R. Labs again, but that he is already obligated to work on a film shoot in Mexico doing stunt work. While Buddy is distracted talking with Cliff and Ellen, his daughter Maxine offers to introduce him to her friend "Mister Rainbow." The family assumes that Mister Rainbow is imaginary, but when Maxine goes to see him by herself, Mister Rainbow is in fact the invisible entity that has been following Buddy around recently.
Buddy and Travis begin a test to see whether there is a significant difference between Buddy's powers when absorbed directly from animals, or accessed through the morphogenetic field. When Buddy accesses electric eel power through the field, he can only bring two bulbs to light up. When he accesses the eel's power directly, he overloads the whole system. They conclude that something is obstructing his access to the field, disrupting it. Still, Buddy's abilities when he uses direct access encourage him to take a stunt job using a stunt of his own design using the eel's power.
Buddy and Travis head to Mexico, with their new idea for the film set. When Buddy arrives, he notices that a number of dogs being used in the film haven't been fed in a while, and asks why. The director claims they have dysentery. Buddy gets into costume, and performs a stunt where he uses the electric eel's powers to connect with the earth's electrical field, and he withstands lightning bolts on camera. Unfortunately, when the director releases the dogs, actors in suits kill them with swords. Buddy's upset at this cruelty causes him to lose his connection to the eel, and he accidentally channels electricity into the attackers.
The director claims he has artistic license to have dogs killed on his set, because he's in Mexico. Buddy is outraged, and the director fires him. Buck Samson appears, offering a job opportunity with S.T.A.R. Labs, and Buddy begrudgingly accepts.

Retrieved from "https://heykidscomics.fandom.com/wiki/Animal_Man_Vol_1_35?oldid=1409320"
Community content is available under CC-BY-SA unless otherwise noted.