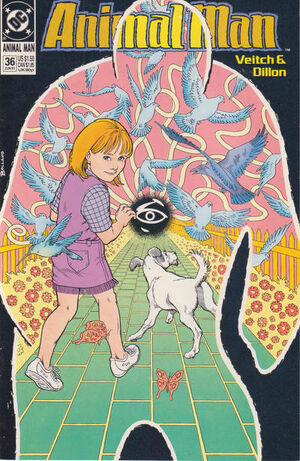 The old man who lives inside Mister Rainbow... The nice old man... He said the animals want to teach you a big secret, Daddy. Are you going to go away with the animals?

Appearing in "The Call of the Wild"Edit

Synopsis for "The Call of the Wild"Edit

Maxine Baker plays in the back yard until she is surprised by the appearance of the entity she calls Mister Rainbow. Inside Mister Rainbow is a surreal landscape, which Maxine enters. Inside, she encounters an elderly Native American man and names him "All the Animals." He gives her a message for her father.
Meanwhile, Buddy Baker is with Travis Cody in Mexico at a resort owned by S.T.A.R. Labs. Despite the efforts of Buck Samson to convince Buddy to join S.T.A.R., Buddy senses something fishy about it, and decides to go back to San Diego, taking Travis with him.
When Buddy returns home, he, his family, and Travis have lunch in the living room. Maxine, mentions having been inside Mister Rainbow, and delivers the message from the old man she met. The message is that the animals want to teach him a big secret. She asks if he's going to go away with the animals, and Buddy feels a strange pull that he has to suppress.
Buddy gets a $37,000 cheque from the recent stunt work he did, and he offers Travis a position as his assistant in being a superhero. Travis is excited, and develops inventions to help Animal Man while Buddy does research on unusual animals whose powers he can use in new ways. Unfortunately, in his efforts to get back into being a superhero, Buddy overdraws his account by $700, which causes tension with his wife Ellen.
Elsewhere, the man that Maxine met inside Mister Rainbow and two other Native Americans summon their messenger because of concern for Animal Man, who he refers to as his son. Mister Rainbow - the messenger - appears, delivering the message that Buddy is creating pain for himself by longing for the good old days. He warns that they could kill him if they press too hard. Then, they send the messenger to Travis.
Travis is terrified at first, but soon has a religious experience as a result of his encounter with the messenger. Meanwhile, Ellen promises to accept Buddy's efforts to return to being a superhero, no matter what happens.

Retrieved from "https://heykidscomics.fandom.com/wiki/Animal_Man_Vol_1_36?oldid=1409321"
Community content is available under CC-BY-SA unless otherwise noted.