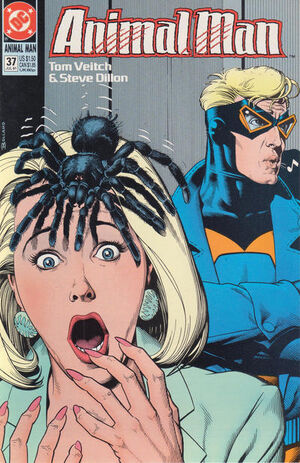 No! I'm a superhuman! I have an identity! Leave me alone! You're not my father! I know who my father is! Get out of my head!

Appearing in "The Zoo at World's End"Edit

Synopsis for "The Zoo at World's End"Edit

Animal Man tests out his connection to the Morphogenetic Field using direct absorption from nearby animals. He ties a spider to his wrist, and uses its powers to scale a building. When he decides to take the elevator back down, the spider escapes. The elevator doors open, and a woman steps out, wearing a fur coat. Buddy berates her for wearing fur, and when she retorts, the spider drops from the ceiling and lands on her head. Buddy retrieves it quickly, but she falls to the ground in hysterics.
Later, Buddy's wife Ellen Baker is on the phone, suggesting that she plans to move out with the kids for the summer due to Buddy's strange behaviour, but that she hasn't told him yet. When he gets home, he is so engrossed in conversation with his assistant Travis Cody that Ellen doesn't get a chance to tell him. Travis is on a rant about how he has had messages from the angels telling him that he needs to bring Buddy to upstate New York, and get into a spaceship there before the earth blows up. Buddy doesn't take it very seriously.
Buddy and Travis test out his plan to use lesser-known animal powers, starting with a fire-salamander, which can shoot a nerve toxin which causes temporary blindness from its glands. The experiment is a success, but Buddy seems to unknowingly retain some of the salamander's characteristics - a fact which disturbs Ellen to the point of reinforcing her decision to leave. Buddy seems not to notice when she begins telling him her plans.
Buddy plans to demonstrate his powers at the San Diego Zoo, but on the preceding night, he sees that the woman who had been frightened by his spider is a talk-show host, and damages his reputation. She casts doubt on his heroism. Buddy plans to go through with the appearance, in order to counteract her negative publicity, but Ellen is visibly concerned.
Buddy's demonstration at the zoo goes over very well, using humour and sensation to give the kids a great show. However, as things are coming to an end, the Native American man who has been watching Buddy from afar contacts him telepathically, telling him that he is Buddy's father. Buddy resists, and his hallucinations disturb the crowd. The old man becomes frustrated, and destroys the clay figure he uses to represent Animal Man. The result is a morphogenetic blast that kills all of the animals in the San Diego Zoo.

Retrieved from "https://heykidscomics.fandom.com/wiki/Animal_Man_Vol_1_37?oldid=1409322"
Community content is available under CC-BY-SA unless otherwise noted.