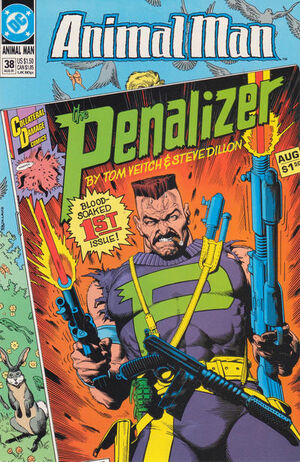 Cliff Baker and his bad-influence friend Ace idolize a comic-book hero called the Penalizer. The Penalizer is a violent, Vietnam vet, who isn't afraid to kill in the name of justice.
Meanwhile, Buddy Baker is bed-ridden and wracked with guilt over his part in the deaths of every animal in the San Diego Zoo. His wife Ellen tries to get him out of bed, but he's unresponsive. When she opens the window, a number of reporters are on their front lawn, begging to speak with Animal Man, and accusing him of going bad. She tries to respond, but eventually gives up, and slams the window shut. Despite Buddy's already fragile emotional state, Ellen reluctantly tells him that she plans to take their daughter Maxine to her mother's place in Vermont for the summer. Buddy begs her to stay, but her mind is made up, for Maxine's sake.
Later, as Buddy helps Ellen and Maxine pack into the car, Maxine states that her friend Mister Rainbow will be remaining behind to help him. Buddy assumes that Mr. Rainbow is an imaginary friend, and says goodbye to his wife and daughter. As they leave, Buddy's assistant Travis Cody arrives in his van to say that he is also leaving. Travis plans to go to Upstate New York to find a buried spaceship and fly away in it before the earth explodes. Buddy doubts Travis' story, and tires of his warnings, eventually blowing up, and sending his former friend away.
With Travis gone, Cliff and Ace decide to play at being the Penalizer, breaking into Travis's old house. The smash all of his inventions, dumping gas on them, and then setting them on fire.
Meanwhile, Buddy feeds his animals, but is overcome with grief at the fact that his daughter is gone. His emotional response leads to a power overload which nearly comes to a head. Fortunately, the phone's ringing brings him out of it. While Buddy talks to his stunt-coordinator friend Dave, he sees Mister Rainbow over his shoulder out the window. He goes outside to investigate, remembering that he has seen Mister Rainbow before. He believes that the entity is having an effect on his powers.
When he encounters the entity, Buddy reacts negatively, and uses morphogenetic energy to blast the creature. It takes the physical form of a large green monster, and Buddy blasts it over and over until it is dead. Then, something weird happens...

Retrieved from "https://heykidscomics.fandom.com/wiki/Animal_Man_Vol_1_38?oldid=1409323"
Community content is available under CC-BY-SA unless otherwise noted.