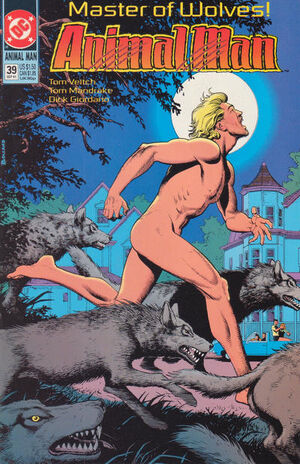 Appearing in "Master of Wolves"Edit

Synopsis for "Master of Wolves"Edit

Somewhere in Upstate New York, Travis Cody has coffee with the Native American man called Stone. Travis asks him about the spaceship he'd dreamed about, that would escape the destruction of the planet. Stone laughs, amused that the messenger (who Travis and the Baker family have come to know as Mister Rainbow), had shown Travis something like that. They turn on a small TV to a news report, stating that in San Diego, strange animal behaviours including a pack of wolves attacking the San Diego Comic-Con.
In San Diego, Dwayne Brown, an acquaintance of Animal Man, arrives at Buddy Baker's house. Unfortunately, Buddy has clearly come unhinged due to his grief over the fact that his wife Ellen and daughter Maxine have left him, and moved to Vermont for the summer. Dwayne hopes to get Buddy's help dealing with the wolf packs running wild in the city, but Buddy's depression is too strong.
Meanwhile, Buddy's son Cliff and his bad-influence friend Ace dig through the remains of Travis Cody's house, which they had earlier set on fire. They find a still-functioning invention of Travis', as Ace admits that he will likely be arrested for burning the place down soon. Ace plans to hitchhike to San Francisco, and invites Cliff, but Cliff doesn't want to upset his father further.
Disappointed, Dwayne leaves Buddy to his feelings. Outside, however, he is attacked by wolves, and just barely escapes in his car without being torn to pieces. Cliff and Ace witness the attack, and rush inside before they become victims. Buddy recognizes the invention the boys stole as Travis' Morphogenetic Field Meter, and accuses them of starting the fire. When Cliff denies it, Buddy strikes him upside the head, and Cliff runs out of the house with Ace in anger.
Buddy - in a strange, deluded state - releases all of the animals he has in his home, despite the fact that they aren't in their natural habitats. That night, he encounters some wolves, and feels that he identifies strongly with them. He rips off his clothes, and runs through the streets with them. With the wolves, Buddy attacks some teens hoping for romance on the beach. Unfortunately, one of the teens has a revolver, and Buddy is injured.
The next morning, Cliff and Ace return to the house, and steal all the money from Buddy's wallet, leaving a note that he is going to stay with his mother. On their way out, they bump into Dave, Buddy's stunt coordinator. Dave notices Buddy's wound, but once he determines that it's not serious, he tries to pitch a stunt which resembles the events of the previous night to an uncanny degree. While Dave is talking, Buddy calls Ellen and tells her that Cliff is gone. Despite her protests, he plans to come see her.
Buddy begs some money from Dave, and heads off on a long trip, vowing that Animal Man will survive whatever is stalking him.

Retrieved from "https://heykidscomics.fandom.com/wiki/Animal_Man_Vol_1_39?oldid=1409324"
Community content is available under CC-BY-SA unless otherwise noted.