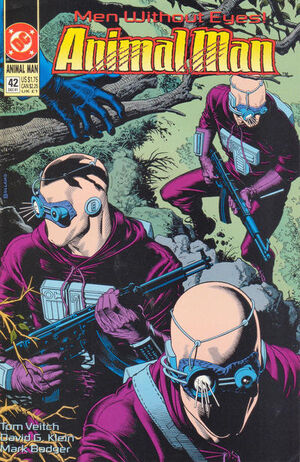 Good work, Mister Gethro! S.T.A.R. Labs will take the lot. Now, any more animals you can bring me from the vicinity of the Frazier Farm -- any animals at all, even dead mice -- I'll give you a bonus.

Appearing in "Men Without Eyes"Edit

Synopsis for "Men Without Eyes"Edit

Knacker Homer Gethro is charged with the task of collecting dead animals from the road and bringing their remains to S.T.A.R. Labs, where Buck Samson will use them in his experiments with creating mutants.
Meanwhile, at S.T.A.R. Labs, Samson tries to convince Travis Cody to work for him designing new equipment for his experiments. Samson claims that the Native American shamans like The Stone are part of a plan to throw the laws of nature into chaos. He wants Travis to be a spy for him. Travis refuses, and Samson sends him home with his assistant Kami, telling her to put Travis in "file six" for a while.
Homer arrives at the Frazier farm, owned by the mother of Buddy Baker's wife Ellen. Mrs. Frazier shows Homer to the barn, where lies the body of Blossom, a cow who had to be shot when her leg wouldn't heal after Buddy dropped her. Homer collects the cow's body, and loads her into his truck.
Kami takes Travis to his home, and Travis is doubtful that he will be let go without incident. He wonders what "file six" is, and Kami reveals that it is a code meaning that she should seduce him. She claims that she doesn't think it will work on him, but it is obvious that the claim is merely part of the seduction process, and that Travis is falling for it.
As Homer drives down the road, he sees a black bear crossing the road, and hopes to shoot it down, but misses.
Back at S.T.A.R. Labs, Samson offers a Captain Sylva of the military the chance to test three prototypical mutant soldiers, composed from human corpses. As the mutants load into a van, Homer arrives with his truck full of dead animals. Samson shows particular interest in the cow from Frazier farm, and when he uses Travis' stolen M-field meter, they realize that Animal Man's powers have a residual effect on the animals around him.
Ellen Baker calls her Uncle Dud in San Francisco hoping that he can find her son Cliff, who was last heard from there. Dud states that he has already found Cliff, after rescuing him from some ruffians. Dud convinces her that Cliff is fine, and her worries are over.
Captain Sylva and his men set up a war-game with the mutants, arming the mutants with paintball guns. The plan is for the mutants to prove their worth by shooting the human soldiers before they are shot by the humans with real guns. However, as the test progresses, the mutants kill the human soldiers and steal their real weapons. Later, they come to a road, and encounter Homer Gethro's in his truck. They shoot him dead, and steal it.
At Travis' coaxing, Kami explains that the bodies he saw at S.T.A.R. Labs were irradiated EX-M Prototypes. After that, it takes little effort on her part to seduce Travis, and convince him to work for Samson.
That night, on the Frazier Farm, Grandma Frazier hears the animals panicking and heads outside to find a large black bear in her yard. She plans to shoot the bear with her shotgun, but her granddaughter Maxine objects, hugging the bear, and claiming that it is her father Buddy.

Retrieved from "https://heykidscomics.fandom.com/wiki/Animal_Man_Vol_1_42?oldid=1491775"
Community content is available under CC-BY-SA unless otherwise noted.