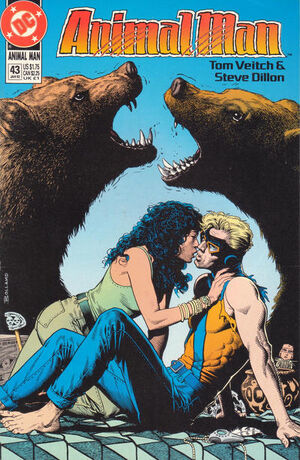 While travelling in the morphogenetic field, Buddy Baker envisions himself being remade in the template by the yellow aliens who gave him his powers. However, the vision disintegrates, leaving behind Stone, a Native American shaman.
In the real world, a young Native American woman looks after Buddy, who is comatose. Stone decides to commune with his partners before they gather together all the others who have access to the morphogenetic field. He warns the girl to avoid falling in love with Buddy, saying that it would be dangerous.
In upstate New York, Ellen Baker struggles to understand Buddy's connection with the large brown bear that her daughter Maxine Baker has grown attached to. Eventually, as they talk, Buddy's consciousness returns to the bear, and he runs off.
Meanwhile, at S.T.A.R. Labs, Travis Cody hacks into the system to find out what Buck Samson is up to. He happens to see Moonlight Jackson discussing his complicity in getting Travis to work for S.T.A.R., and their dealings with the reservations for species monitoring. Samson alludes to some plans he has for Animal Man, but doesn't go into detail. Moonlight warns that Stone and the other shamans are getting ready for something big.
Samson and Moonlight are interrupted by the appearance of Captain Silva, who was testing prototype mutant soldiers who gained self-awareness and killed his men. Samson sends his men to recapture the escaped mutants, and kills Silva. Through the security system, Travis watches as Captain Silva's corpse is turned into one of the mutants as well.
While in the bear's body, Buddy meets another person with his abilities who is also in the form of a bear. They run together, and eventually mate. Buddy awakes to see the young native girl sitting over him. She introduces herself as Tristess, and they kiss. Back in New York, Ellen wakes up from a dream where she saw Buddy kissing another woman. Her mother suggests that maybe it's time to find a more stable man, but Ellen states that she will never leave Buddy.

Retrieved from "https://heykidscomics.fandom.com/wiki/Animal_Man_Vol_1_43?oldid=1409328"
Community content is available under CC-BY-SA unless otherwise noted.