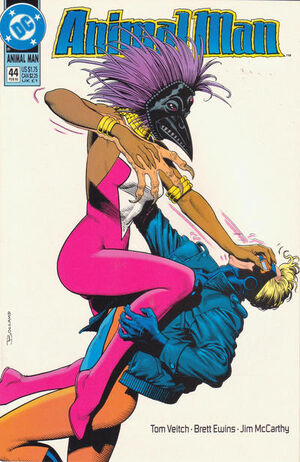 Give it up, woman. Pull in your talons... and tell me what you're doing here.

Appearing in "Who IS That Masked Woman?"Edit

Synopsis for "Who IS That Masked Woman?"Edit

After hitchhiking to upstate New York, a mysterious masked woman encounters one of Buck Samson and S.T.A.R. Labs' mutant soldiers. After using animal powers to kill it, she flies away, to the confusion of bystanders and authorities.
Buddy Baker and his new acquaintances Tristess and Moonlight Jackson have a barbecue, as he has just awoken from an apparent coma. They are interrupted by the appearance of the masked woman. Buddy assumes she is his old foe Tabun and he picks a fight, despite the woman's warnings. Buddy is stronger than in the past, but the woman seems to have more powers than he remembers Tabun having. Eventually, she convinces him to relent, and removes her mask. The woman is actually Vixen.
Meanwhile, Ellen Baker travels to New York City to give a job interview at Wonderful publishing company. A woman named Sherry Shreeve looks through Ellen's portfolio and determines that she might be well suited to work in the comic book department for a man named Lester.
Vixen explains that after defeating Tabun, she inherited the power of animal spirits from her, and united with her darker African side. Travis Cody and Kami, an employee of S.T.A.R. Labs, arrive. After everyone is introduced, Buddy asks Travis for a ride back to the Frazier farm. On the way, Travis warns that Moonlight Jackson cannot be trusted, and explains that Buck Samson wants to capture Animal Man and use him in DNA experiments.
Lester tells Ellen that the Penalizer is the publishing house's primary comic, and that he needs a colorist for it. As he goes through a number of submissions to the book, they happen upon a script for the Penalizer written by Ellen's son Cliff. Suddenly, Lester pulls a .44 Magnum on Ellen.
A surviving mutant soldier drives a truck on the countryside in search of plasma, to keep itself alive. It kills a fox, and drains its plasma. Fumbling through the woods, the mutant happens upon Maxine Baker.

Retrieved from "https://heykidscomics.fandom.com/wiki/Animal_Man_Vol_1_44?oldid=1409329"
Community content is available under CC-BY-SA unless otherwise noted.