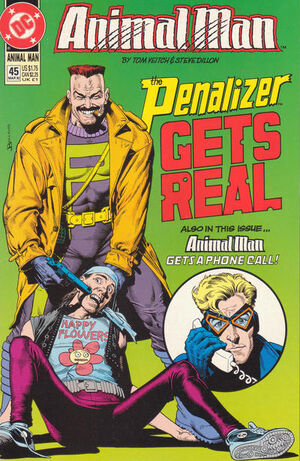 I know something big has got a hold of you buddy. I know you have to deal with it... whatever it is. It's affecting Maxine... It's hard to accept but she's probably destined to be a... superhuman.

Appearing in "The Beat of Darkness"Edit

Synopsis for "The Beat of Darkness"Edit

Comic book writer Lester Decker lives a quiet life with his cat, but the life of his character, the Penalizer, is all guns and glory.
Ellen Baker has been hired to illustrate The Penalizer, and the job the only source of income for the Baker family, with Buddy Baker making no money as a super hero. Buddy notices that something is bothering Ellen, and after determining that it isn't money or their children, he presses the issue. Ellen reluctantly tells him that she has been having dreams and visions of Buddy being with another woman. He denies it, but her feelings are clearly hurt.
Ellen realizes that Lester has stolen a character created by her son Cliff in a script that the writer had rejected. She tries to tell Buddy, but he's on the phone with director Raney Fox, who wants to make a film about Animal Man's life story. After telling Ellen about how much money they stand to make from the deal, Buddy has a look at the pages from the comic book. He decides that he doesn't approve of the content, and suggests that if his movie deal goes through, she should quit her job.
The story of the comic book shows the Penalizer tracking Dr. Darkness, a villain with no arms and no legs. Some kids go to meet Dr. Darkness demanding drugs. In exchange for the drugs, the villain gives them Uzis and asks them to kill the Penalizer. They see the Penalizer on the street and open fire. He retaliates, and kills them both. When he realizes that his assailants were children, he sheds a single tear.
Lester gets a call on the phone from a man asking for help with removing drug dealers from his apartment building. The man mentions that Lester has helped someone else with a similar problem. Lester asks for a fee of 25,000 dollars, and then dons a costume and arms himself with a big gun - the real life Penalizer.
Ellen and Buddy realize that their daughter Maxine has been away too long, and call for her. She doesn't respond, but her small triceratops Winky appears, and seems to be afflicted with a gunshot wound. Buddy senses that something is wrong, and uses his powers to track her. He is relieved to find that she is safe, but he is puzzled by the fact that she is with someone else, and a mile underground.

Retrieved from "https://heykidscomics.fandom.com/wiki/Animal_Man_Vol_1_45?oldid=1409330"
Community content is available under CC-BY-SA unless otherwise noted.