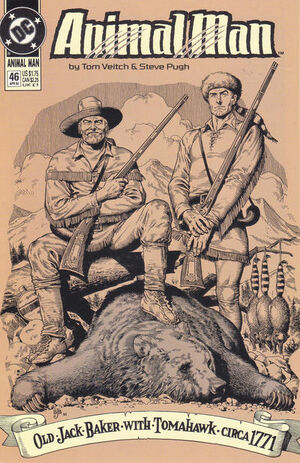 I... I don't know how it happened... I thought I was going crazy... then suddenly it was like I had Animal Powers! I was the tiger.

Appearing in "A Rage Of Fathers"Edit

Synopsis for "A Rage Of Fathers"Edit

Buddy Baker recounts to his wife Ellen the story of his origins, as he now remembers them.
An eighteen-year-old and drunken Buddy rides with his band-mates in a car, bragging that he went all the way with Ellen. Suddenly, he feels the urge to throw up, and his friends kick him out of the car onto his front lawn. He looks up from his vomiting to see his angry father, Frank, who tells him never to come home drunk again. At the dinner table, Frank complains that Buddy is going down a negative path, and decides that they should go hunting in order to recapture the glory of their ancestors.
Buddy's father is incredibly zealous about the hunting and killing of animals, claiming that it is how he and his forefathers have communed with nature. Buddy is obviously less interested - particularly in the killing. In fact, when Frank kills a rabbit with a shotgun, the resulting gore makes Buddy feel sick. Over much protest, Frank forces him to take a shot at a buck. Buddy misses, and his father manages to shoot it through the neck. Unfortunately it is still breathing, and Frank takes great pleasure in finishing it off with a knife, much to Buddy's horror.
Frank suggests that they drag the deer back to camp so that Buddy can skin it, but his son refuses. Frank shoves him down onto the buck's bloody carcass, but he becomes excited by the sight of bear tracks nearby. While his father dreams of killing a bear for himself, just as his father and grandfather had, Buddy notices that a huge UFO is crashing right in front of them.
The impact knocks Buddy out, and he awakes to see his father fighting with a huge grizzly bear, unloading his shotgun into the animal. As the bear dies, it takes a final violent swipe at Frank's chest. Buddy can do little to stop his father's bleeding, but suddenly, Stone appears. The shaman uses his medicines to heal Frank, and then touches Buddy's chest. The touch sends a huge jolt through the boy's body, and Stone seems satisfied that Buddy survived it. Buddy realizes at this moment that, somehow, Stone is his real father. He bids Buddy to come with him to investigate the crash.
Stone claims that the object is not a spaceship, but rather a cocoon in which his enemy resides. Drawing a symbol on the side of the cocoon, he hands Buddy a club, and orders him to strike the symbol to shatter it. The club gets stuck, and the cocooned creature awakens, burrowing underground. Buddy feels a strange sensation come over him, and Stone warns that things will never be the same again.
Later, Buddy is at a carnival, begging Ellen to go to a baseball game with him. Ellen tells him that after lying to his friends about their relationship, she decided to go out with Buddy's friend Roger. Buddy feels betrayed, but suddenly a tiger escapes its cage and charges Ellen, preparing to attack. Buddy is surprised to find himself springing into action, and using his hitherto unknown powers to knock the tiger away.
A relieved Ellen agrees to go to the game with Buddy, and even suggests that he might make it to first base.

Retrieved from "https://heykidscomics.fandom.com/wiki/Animal_Man_Vol_1_46?oldid=1409331"
Community content is available under CC-BY-SA unless otherwise noted.