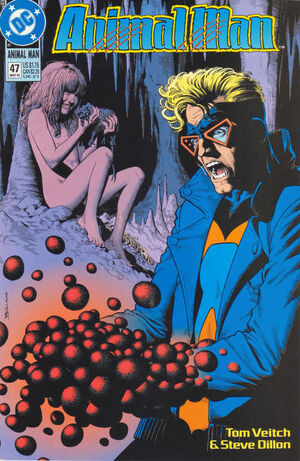 Ten million years is a long time... a time to sleep the sleep of primordial bliss... Bliss hopelessly darkened with our anger against those who would create life in spite of our disapproval. We curse the animal masters!

Appearing in "The Shining Man"Edit

Synopsis for "The Shining Man"Edit

Somewhere in the wilderness of upstate New York, Michael Payson Maxwell takes a bite out of the arm of one of S.T.A.R. Labs' mutant soldiers, who he has destroyed. He sees a deer nearby, and uses his powers to blast it, taking its carcass deep into a cave, where a naked and feral Maxine Baker waits.

Back on the Frazier farm, Buddy Baker uses his powers to track Maxine. He senses some kind of malevolence, evil, and unspeakable darkness. This description horrifies his wife Ellen, who is forced to simply stand by as Buddy flies off in search of their daughter. Filmmaker Raney Fox offers to drive Ellen to the location: the Baker family hunting cabin.

A strange force disrupts Buddy's powers nearby his family's cabin, and on arriving there, he remembers the cocoon he had seen there several years ago. Ellen arrives just in time to see her husband burrow underground in search of the cocoon.

Elsewhere, Travis Cody uses devices he's stolen from S.T.A.R. Labs to hack into their system. He uses a virtual reality device meant for macrocosmic manipulation of genetic molecules, for their studies on mutant synthesis. Inside, he discovers a top-secret structure housing a physical double for Buck Samson, who hopes to use Animal Man's DNA to give himself super-powers. Travis tries to escape back to reality and inform Samson's superiors in San Diego, but Samson becomes aware of the breech, and zaps his brain.

When Buddy enters the cave, he is attacked by Maxwell. Buddy becomes enraged when he sees Maxine there, and realizes that she has become feral. However, Maxwell uses his powers to displace the molecules in Buddy's hands. Maxwell leads Buddy and Maxine deeper into the cave, where the cocoon rests. Maxwell has obviously gone mad, and claims to have gained his powers from the antagon - the name he has given the cocoon. He curses the Animal Masters, and is absorbed into the cocoon before Buddy and Maxine's eyes, and then everything falls into chaos.

Retrieved from "https://heykidscomics.fandom.com/wiki/Animal_Man_Vol_1_47?oldid=1409332"
Community content is available under CC-BY-SA unless otherwise noted.