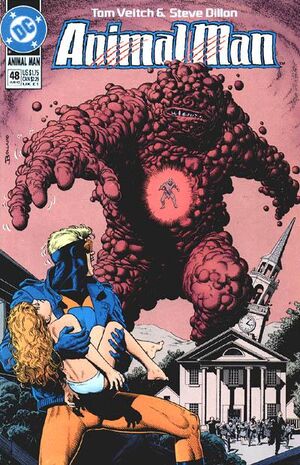 Yes. I know now... I understand what you have to do. I can't pretend anymore. Our homely little lives never really existed... did they? There was only this terrible reality that touched you... and through you it touched us.

Appearing in "The Meaning Of Flesh"Edit

Synopsis for "The Meaning Of Flesh"Edit

Ellen Baker and filmmaker Raney Fox observe the emergence of Antagon from the earth, having possessed the willing body of Michael Payson Maxwell, the former B'Wana Beast. When Antagon damages Fox's car, he attempts to get to it, but his body is burned away by negative energy. The horror of that moment convinces Ellen that her husband Buddy and her daughter Maxine are dead already.
Fortunately, Antagon leaves without harming Ellen, and Buddy appears carrying Maxine, naked and barely alive. Ellen gives up her coat to the child as Buddy informs her that he has to take Maxine to see The Stone, and beg him to take away her connection to the morphogenetic field. Ellen resigns herself to the fact that her family's lives will never be normal again, and professes her love for her husband as he flies away.
Buddy realizes that all of the strange negative effects of his powers that have happened recently were a result of Antagon's influence. He joins Vixen and Tristess at their camp, and the four of them begin a ceremony to call forth The Stone, their shaman, in the sweat lodge.
Elsewhere, Travis Cody contacts his partner Kami from cyberspace, revealing that Buck Samson zapped his body into a coma leaving him trapped. He asks her to patch him through to San Diego to contact Samson's superiors at S.T.A.R. Labs, and reveal his plot to create super soldiers from mutated tissue. Meanwhile, Samson's plan is completed, and he is imbued with morphogenetic energy, thanks to tissue from a dead cow that had come in contact with Animal Man. Kami patches Travis through, but a knock comes at the door from Moonlight Jackson, who has been sent to kill both she and Travis. He regretfully shoots her dead.
The three heroes with animal powers complete their ceremony, and they are greeted by the messenger of the Animal Masters, whom Maxine refers to as Mister Rainbow. The Stone appears within the messenger, bidding that the heroes join him in the other world. Meanwhile, Antagon arrives, and becomes enraged when he discovers that the heroes and The Stone are nowhere to be found.

Retrieved from "https://heykidscomics.fandom.com/wiki/Animal_Man_Vol_1_48?oldid=1409333"
Community content is available under CC-BY-SA unless otherwise noted.