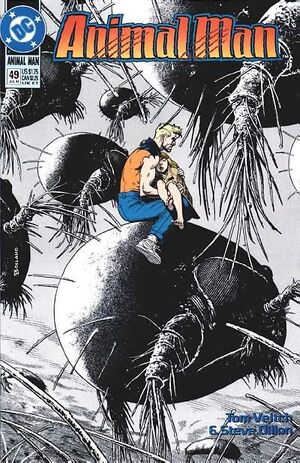 I'll confront this destructive power the Shamans have unleashed-- as Metaman, the man with the mind that manipulates matter!

Appearing in "The Hot Heart Of Abstract Reality"Edit

Synopsis for "The Hot Heart Of Abstract Reality"Edit

Hired gun Moonlight Jackson stands over the comatose body of Travis Cody, whose consciousness has been entirely downloaded into cyberspace. At Buck Samson's command, Jackson kills Travis' body before his eyes, leaving him trapped forever.
Meanwhile, Buddy Baker, his daughter Maxine, Tristess, and Vixen traverse the surreal landscape of the Door Between Worlds. They find themselves under attack by giant dust mites, and Buddy is forced to face a test of his abilities. A large insectoid creature appears on the horizon, and Buddy uses his connection to the morphogentic field and his newly regained memories of the history of his power to calm the creature, and the four ride it to the other side.
At S.T.A.R. Labs, Buck Samson and his team come under attack by their San Diego counterparts, who have been alerted by Travis of Samson's experiments with DNA. Samson meets his attackers and uses his new morphogenetically sourced powers to crush them.
Stone welcomes Buddy and the other heroes to his camp on the Labrador Peninsula. He christens Maxine as Little Wing, and heals her, then introducing the heroes to his companions Arum and Krate. Afterwards, he relates the story of the origins of the Animal Masters, and Antagon.
The Animal Masters have existed for thousands of years, using their abilities to create animals - a duty that has been passed down over generations. However, with that power came Antagon, the shadow of the Animal Masters. They attempted nearly destroyed the entity until it retreated into its cocoon, far beneath the ocean. Later, when Buddy gained his powers, The Stone failed to destroy the cocoon, and it burrowed under ground. Now, Antagon has merged with Michael Payson Maxwell, the former B'Wana Beast, and the four remaining heroes are to be entrusted with the wisdom of the Animal Masters, and fulfill their duty to conquer Antagon.
Buck Samson struggles to come up with a name for himself, eventually settling on Metaman. Suddenly, Travis Cody appears on his monitors, threatening to shut down the systems. Samson and his lackeys are incredulous, and they separate him into data packets, and place him in digital storage. When Travis is eventually reconfigured, he will be a cybernetic tabula rasa, under Samson's control.
Back at the Frazier Farm, Buddy appears in the living room through an inter-dimensional doorway. He delivers Maxine to her mother, and promises to deal with the greatest peril for all mankind by dinner time.

Retrieved from "https://heykidscomics.fandom.com/wiki/Animal_Man_Vol_1_49?oldid=1409334"
Community content is available under CC-BY-SA unless otherwise noted.