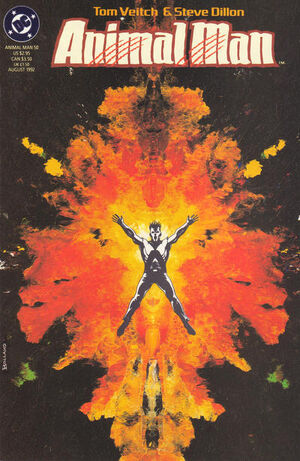 We are free, absolutely free. And yet paradoxically, we have no choice. Without us the work of creation will cease. The M-Field, the source, will be no more. That must not happen.

Appearing in "Journal Of A Plague Year"Edit

Synopsis for "Journal Of A Plague Year"Edit

The scriptwriter for the film version of Animal Man's life story is staying with Ellen Baker, and harbouring romantic feelings for her, despite the dire circumstances of their meeting. He offers to buy groceries for her, knowing that Antagon is still wandering the countryside, destroying entire cities.
The scriptwriter has a near-death encounter with Antagon, and is inspired to follow the path of destruction, and see what unfolds. The military attempts to stop the entity with no effect, but eventually, Metaman appears on the scene and claims that he can use his powers to destroy Antagon. The military step back, fully expecting him to end up dead.
As Metaman approaches, Antagon destroys his S.T.A.R. Labs helicopter and its passengers. Metaman battles Antagon until finally, he kills the entity's host, Michael Payson Maxwell. Unfortunately, Antagon then possesses Metaman, who makes a more powerful host.
Stone prepares the new Animal Masters - Buddy, Tristess, and Vixen - for their final showdown with Antagon, stating that it will be their final test. Stone, Arum, and Krate will draw Antagon into the morphogenetic field, dispelling him there. They bring Antagon into their inter-dimensional doorway, and he uses his negative energy to shatter the shamans' imaginings.
The three shamans' spirits enter into the three new Animal Masters, dragging them into the darkness created by Antagon. Tristess and Vixen believe that they have been trapped, and left to the same fate that destroyed the shamans, but Buddy has an epiphany. Buddy realizes that with their new found powers to create, the heroes must create an entire universe in order to counter Antagon's negative force. The three heroes awaken in their own world, leaving Antagon trapped somewhere, still alive, in the universe of their imagination.
Ellen confides in the scriptwriter that she has been having recurring dreams about Buddy having sexual encounters with Tristess. The scriptwriter plays upon her feelings in order to manipulate her into turning to him for support. Buddy catches them in an embrace, denying that his relationship with Tristess is at all sexual. He kicks the scriptwriter out of the house, and as he lies in pain on the ground, Buddy states that they are going to be friends.

Retrieved from "https://heykidscomics.fandom.com/wiki/Animal_Man_Vol_1_50?oldid=1409335"
Community content is available under CC-BY-SA unless otherwise noted.