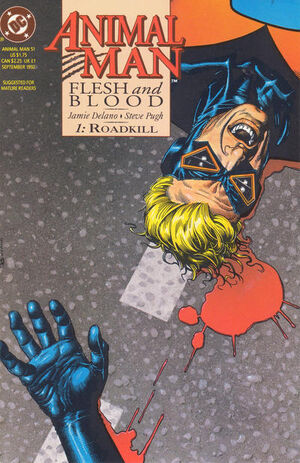 The bad feeling creeps across my skin, like prickly-heat. My hackles rise. My nostrils flare and I sniff with the nose of a dog. I don't like what I smell.

Cliff Baker and his great uncle Dudley share a taste for gore and the macabre. Dudley lets Cliff smoke and drink, and Cliff respects his uncle's philosophy.
That night in Vermont, Buddy Baker and his wife Ellen are up late by a pond. Buddy explains that since his recent training with the shamans, he has gained more control over his powers and he is calmer and stronger. He assures Ellen that things are going to be alright from now on. He asks her forgiveness for his unusual behaviour in months past, and they make love.
Meanwhile, Ellen's mother Mary is up late recalling her own husband and feeling jealous of Ellen and Buddy's relationship. She is interrupted when her granddaughter Maxine knocks on her door in tears. Maxine had a nightmare in which a man with knives for hands removed her brother Cliff's heart, and then she and her brother's body were crushed by an oncoming ice-cream truck. Mary assures Maxine that Cliff is fine, and in good hands with Dudley.
The next morning, Ellen hears of Maxine's dream, and begs Buddy to bring their son home as soon as possible. He promises to go to San Francisco to find Cliff after breakfast. Mary lends Buddy $1,000, and tells Maxine to look after her mother before heading to the airport. When he arrives in San Francisco, Buddy gets a bad feeling. He checks Dudley's apartment, and the landlord notifies him that Dudley has taken Cliff on a trip in his camper. Buddy gets an address from the dealership who sold Dudley the camper truck.
Cliff becomes suspicious of Dudley's intentions, but refuses to return to his family, believing that they don't want to hear from him. Buddy gets closer to the house where Dudley and Cliff are still packing to leave, but he is distracted by the corpse of a dog in the middle of the road. Dudley spots Buddy on the road, and shoves Cliff into the back seat, hoping to get away. With Buddy in his sights, Dudley runs over Cliff's father, grinning madly, and leaving Buddy a twisted carcass on the asphalt.

Retrieved from "https://heykidscomics.fandom.com/wiki/Animal_Man_Vol_1_51?oldid=1409336"
Community content is available under CC-BY-SA unless otherwise noted.