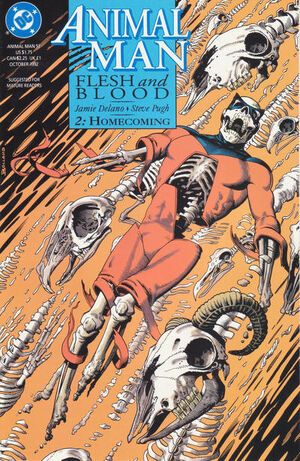 These other life-forms which I push by and through don't seem distressed as they wend their inevitable way down to drink willing draughts of oblivion. They've accepted their fates. Not me, though. I'm Buddy Baker-- and I'm not dead yet.

Maxine Baker makes a 'Welcome Home' cake for her brother Cliff, anticipating her father Buddy's return from San Francisco after seeking Cliff out. While Maxine and her grandmother Mary are chasing her pet triceratops Winky out of the crops, Ellen Baker receives a call informing her that Buddy has been injured in a traffic accident.
Buddy finds himself traversing a strange landscape bathed in red light. Eventually, he comes to the realization that he is either dead or near to death, after having been hit by a truck. He uses his powers to retain his sense of self, and works his way back to his body, having become dislocated from it.
Meanwhile, near Yosemite National Park, Cliff's great uncle Dudley threatens to skin a snake on the side of the road. A cyclist happens by, and notices that Dudley's camper-truck has been damaged. When he investigates the damage, he discovers one of Animal Man's gloves trapped under the fender, with fingers still inside. Dudley shoves the cyclist and his bike down into the canyon before Cliff realizes anything has happened.
Ellen arrives in San Francisco to identify her husband's body. Meanwhile, Buddy wakes up in a morgue drawer, confused and terrified. As Ellen and the morgue attendants arrive in the room, Buddy escapes the drawer, much to their horror. Buddy is disoriented and confused until he catches a glimpse of his reflection. He realizes that he's managed to re-enter his dead body, and that an autopsy has already been carried out, leaving his body a mess.
Desperately, Buddy tries to find a new host for his consciousness while he lets his real body die. Ultimately, he settles on a mite in Ellen's hair.

Retrieved from "https://heykidscomics.fandom.com/wiki/Animal_Man_Vol_1_52?oldid=1409337"
Community content is available under CC-BY-SA unless otherwise noted.