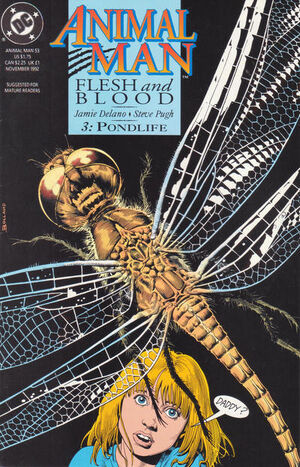 Maxine seems real calm and strong-- but I'm not sure she's taken it in yet. She says you can't be dead; that even if your body's dust, you'll be around forever-- a part of you in every living thing. I wish I had her faith.

Ellen Baker sits at the pond near her mother's farm where she and her husband Buddy had spent many intimate moments together. She speaks aloud to her husband's ashes, worrying what she will do now that he is dead. She worries about their children, and especially Cliff's safety with his great uncle Dudley. Sadly, she dumps Buddy's ashes into the pond. Meanwhile, buddy's consciousness is actually dwelling within a mite living on one of Ellen's eyelashes, but when she starts to cry, he is washed away into the pond, and nearly drowns. He is forced to transfer his consciousness into a nearby hydra. Unfortunately, that hydra is eaten by a fish, which he then transfers to.
Somewhere in the wilderness of norther California, Cliff and Dudley fish in a pond. Dudley catches one, and forces Cliff to kill the flapping fish with a rock. He then tells Cliff to gut and clean the fish. Cliff feels guilty about killing the fish, knowing his father would disapprove. Dudley explains that the whole world runs on death, and that they shouldn't be afraid to look death in the eye. Dudley lies that Cliff's parents don't care about him, claiming that he called them, and that they were at Disneyland with Maxine. He assures Cliff that he is his father now.
Back in Vermont, Ellen shares her grief with her mother Mary, refusing to eat. Ellen accepts that Buddy is dead, but worries that after losing him, she will also lose her children. She worries for Cliff's safety, having not heard from her son in months. She worries that Maxine is pulling away from her, noting that she had recently got in a fight at school because she had punched a boy who was squashing bugs, claiming that the bugs might have been her father.
Against her mother's wishes, Maxine sneaks off to the pond thinking there is a chance she will find her father there. She senses him through the morphogenetic field, deducing that he is somewhere under the water in the pond. Under the water, Buddy is now hosted by a dragonfly nymph, and sensing his daughter's presence, he makes his way to the surface. Maxine stares at the nymph for hours until it breaks open, and a young dragonfly emerges. Buddy forces the insect to fly toward his daughter, knowing that it is not physically ready to do so. Just as he nears Maxine, he is eaten by a bat.

Retrieved from "https://heykidscomics.fandom.com/wiki/Animal_Man_Vol_1_53?oldid=1409338"
Community content is available under CC-BY-SA unless otherwise noted.