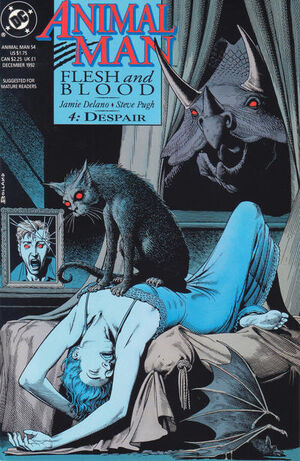 Defiant in rejection, the cat would be content to turn its back and spit in the moon's cold eye. It is me that cries in sympathetic, lonely grief.

Cliff Baker and his great uncle Dudley hunt in the wilderness of northern California, and he is forced to drag each animal's carcass with them as they travel to some unknown location. Out of Cliff's sight, Dudley keeps Cliff's dead father Buddy's severed fingers in a little pouch on his person. Dudley leads Cliff to their destination - a box canyon where scenes from several of their favourite horror flicks were filmed.
In Vermont, Ellen Baker is awakened by shouts from her daughter Maxine, who is screaming at her grandmother to leave a bat alone, because it is actually her daddy. Maxine is horrified when her grandmother Mary swats the bat with a broom, stunning it.
The bat is actually Buddy, as Maxine feared, and while he is still alive, his host is weak due to the fact that he has kept it from living a typical bat's existence for his own selfish needs to see his family. When night falls, Buddy finds himself under attack by a cat. He is forced to transfer his consciousness into that of the feline predator, as it tears open the bat's flesh and eats it. When he is done, he climbs in through the window as Ellen - who has been medicating her grief with alcohol - lies in a daze on the couch. He begins licking and caressing her in a sexual fashion, until she realizes that he is a cat, and he has got the bat's blood all over her shirt.
Dejected, Buddy crawls into the barn, where he encounters Winky, Maxine's pet triceratops. Sensing that the creature will be free from the constant annoyance of being prey and predator, Buddy transfers into Winky's body. Sharing Winky's own loneliness, Buddy lets out several cries of anguish, alerting his family. Using his horns, Buddy breaks out of the barn, and wanders along the countryside.

Retrieved from "https://heykidscomics.fandom.com/wiki/Animal_Man_Vol_1_54?oldid=1409339"
Community content is available under CC-BY-SA unless otherwise noted.