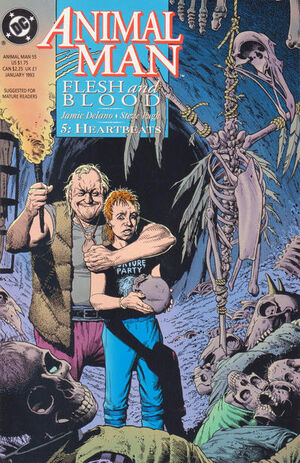 If I could trace the dinosaur's evolutionary branch back through its genetic memory to our shared pint of origin, could I re-evolve myself and be born again? It's so crazy I can't believe I'm thinking it-- but the fact that I'm thinking at all is crazy in itself.

Cliff Baker wakes up in a cabin in the box canyon of Despair in California. His great-uncle Dudley has been up for hours hunting. Despite Cliff's reservations, at Dudley's urging, he beats a sack of rabbits until they are dead, and they eat them for breakfast. Cliff is somewhat disgusted by Dudley's violent, predatory nature, but he has little choice but to stay on his uncle's good side.
In Vermont, Cliff's mother Ellen worries about her son, recalling a time from her past when her uncle Dudley had chased her, and refused to let her go once he caught her until she agreed to give him her first-born. At the time, she thought it was a game, but now she worries that he meant it. Ellen's mother Mary is disgruntled at the fact that she plans to involve the police in the search for Cliff, suspecting Dudley's intentions. Before leaving, Ellen tells her mother to watch over her daughter Maxine.
Maxine is out in the woods, looking for her father whose consciousness has been housed inside the body of her pet triceratops Winky. She wants to use her connection to The Red to pull them back to her, but when she realized how alone Winky felt when she did that in the first place, she decided she could not. Instead, Maxine must go to them.
Meanwhile, from within Winky, Buddy Baker realizes that the creature is actually a female, and has a strong desire to mate and procreate. He considers that, in some sense, he wants to be able to do the same thing - to pass his consciousness into a new likeness of himself. Following that lead, Buddy wonders if he can retrace the dinosaur's genetic memory to the point at which what would become human DNA and what would become dinosaur DNA were identical - to the origin of their common source. He decides to attempt it.
Elsewhere, Dudley takes Cliff to an old mine shaft full of skeletal remains. He and his partner used to shoot films on the location until the partner was tied up, and his heart was cut out. Cliff believes his uncle is making dark jokes, but Dudley professes that the story is true. Dudley treats the mines like a church, taking Cliff down to a giant skull, where he claims that death should be worshipped, and satisfied with sacrifices. Dudley leaves Cliff down there under the pretense that he is grabbing another torch, but he eventually pulls up the rope-ladder behind him, leaving Cliff alone in the dark.
Buddy traverses The Red, attempting to recreate his own DNA. As he does this, though, Winky begins to slow down, and seems to be dying.
Ellen returns to her mother's farm to find that Maxine has gone missing. While she yells at her mother for failing to look after her daughter, Maxine appears in the doorway, carrying something bundled in her coat. She reveals that her cargo is an egg that Winky laid moments before she died. Maxine had tracked down Winky after hearing her cries, and collected the egg before her friend returned to The Red. The egg seems to house a living thing.

Retrieved from "https://heykidscomics.fandom.com/wiki/Animal_Man_Vol_1_55?oldid=1409340"
Community content is available under CC-BY-SA unless otherwise noted.