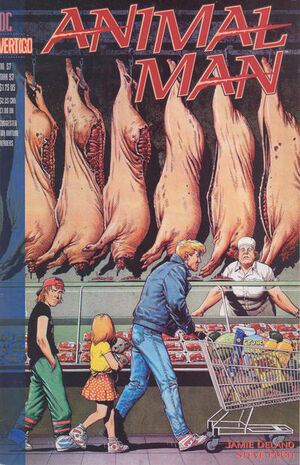 Relax? You'd think, with kids as wild as mine, that'd be out of the question. But it's weird, for nearly the first time since I was lost in the Lifeweb, I am relaxing.

While sleeping, Buddy taps into the Lifeweb and briefly experiences the final moments of a seal off the coast of Labrador, moments before it is consumed by a killer whale. Ellen awakens him, and chastises Buddy for constantly withdrawing into the Lifeweb instead of being present with his family. He admits that he brought himself back from death just so that he could be with them, and Ellen responds that he should get on with his life, and spend time with his children. Even so, Ellen plans to be away in New York City for a few days, hoping to be courted by publishers. The two make love before retiring for the evening.
The following day, Buddy drops Ellen off at the airport for her trip. He takes the kids into town to do some shopping. Cliff goes into a video store, hoping to find some brutal horror movies, but he an altercation with the proprietor when it is assumed that Cliff is in cahoots with the christian protester outside the store.
Meanwhile, Buddy and Maxine pick up some groceries, but she is horrified when she encounters the meat counter, feeling empathy for the animals that were killed. They leave after the cashier complains about the damage that Buddy causes in responding to her cries. Outside, Cliff rejoins them, and they decide to go to a haberdashery, in order to pick up materials for something Buddy needs. Inside, Maxine picks up an order for her Grandmother. The owner mentions that her dog is being unfriendly, and Maxine uses her abilities to determine that it's because the dog is in heat.
After leaving the kids alone to eat at a burger joint, Buddy returns to discover that all of the animals in the nearby pet store have escaped, with Maxine's involvement apparent. Apparently, she coaxed a monkey into releasing all of the other animals, and during the chaos, Maxine bit the store owner. The cops converge on the scene and frantically try to round up all of the animals, while Cliff and Maxine hide inside of Buddy's jeep, where he discovers them, finally.
They eventually return home, and Buddy tucks Maxine in to bed. They laugh together over the events of the day, and she thanks him for being happy again. Buddy checks on Cliff, who is up working on his own Kannibal Kid comic, and Buddy admits that they had some of the most fun he's had in years together. As he closes the door, he hears Cliff say he loves him, and smiles. Buddy heads downstairs, only to be accosted by his mother-in-law Mary Frazier, who takes his measurements with little ceremony, causing him a bit of distress.
Saved by the ringing telephone, Buddy takes a call from Ellen in New York. She is sharing a hotel room with her friends Juliet and Mike. They talk about each other's days, and Ellen seems pleased that Buddy is happy. He begins describing all the sexy thoughts he's had about her recently, while her responses are overheard by Mike, who is in the shower. After the call ends, Mike emerges from the shower naked and starts making a move for Ellen.

Retrieved from "https://heykidscomics.fandom.com/wiki/Animal_Man_Vol_1_57?oldid=1409342"
Community content is available under CC-BY-SA unless otherwise noted.