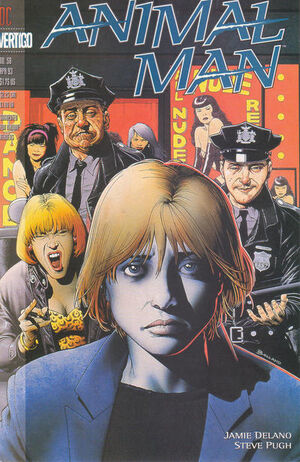 No way! I've been sexually harassed, beaten up and robbed, abused and assaulted by the police when I tried to report it. Now you're gonna arrest me on a fake charge? Well, Lady, I'm telling you to shove your cooperation up your fat, nazi ass and spin!

Buddy Baker wakes up, realizing that he has once again been traversing the Lifeweb through his "animal dreaming." He notices that the experience mirrored his own feelings of responsibility and protectiveness with his wife Ellen away in New York City while he is alone with the kids.
Buddy worries with good reason, as in New York, Ellen is finding herself under pressure from Mike, her friend's boyfriend who she has been left alone with. After seeing her get turned on talking to Buddy on the phone, he thinks he has a shot with her, offering her drugs and alcohol, if she needs some kind of social lubrication. He forces her back onto the couch, and with little recourse, she thrusts her knee into his bare crotch. He tries to drag her down on top of him, but his girlfriend Juliet appears in the doorway.
Despite expectations that Juliet would be angry, she seems to be fine with Mike's actions. She apologizes to Ellen, admitting that she knew what he wanted when he asked her to leave, and that she's too afraid of him to stand up for herself. When she reveals that he hurts her sometimes, Ellen tells her to leave him immediately, but Juliet is hesitant, worrying about his connections. Mike deals drugs to Wall Streeters, and has a gun. Ellen leaves, begging her friend to come with her, but Juliet can't bring herself to go. With Ellen gone, Mike decides that Juliet needs to be punished again.
Ellen winds up lost at night in the rain. She wanders to a bar, hoping to use the phone, but finds no help. She keeps walking, looking for a cab stand that isn't there, eventually giving up and trying a nearby phone booth. Unfortunately, when she attempts to use the phone, someone comes up behind her and knocks her to the ground, kicking her. The assailant steals everything she has, even her drawing portfolio. She finds no help from nearby onlookers, and wanders until she finds a parked cop car.
When she opens the door, she finds another cop having sex with someone in the back. They disregard her robbery report, assuming that she's a prostitute, and suggest that they might help her in exchange for sex. She is so disgusted that she slaps one of them, but before they can respond, they get called away on a ten-thirteen (officer down).
The prostitute whom Ellen caught with the police officer states that Ellen just isn't cut out for the city, and suggests that she call her husband Buddy to get her, but Ellen is too proud. The hooker offers to help by taking her to a shelter run by some nuns, but before they can get there, they get picked up by the vice squad, apparently on orders from the officers she encountered earlier. They plant drugs on her, and arrest her.
Ellen is kept in custody, cavity searched, and saddled with an inept public defender. Eventually she wakes up to find that she has a cellmate named Jaqueline who has been charged with conspiracy to murder. Jaqueline is sympathetic, and comforting, and Ellen falls asleep in her arms.
Back in Vermont, Buddy gets a call from Juliet, who reveals that Ellen left the night before, and has been missing for a day. Worried for her, he bays at the moon, and hears no answer.

Retrieved from "https://heykidscomics.fandom.com/wiki/Animal_Man_Vol_1_58?oldid=1409343"
Community content is available under CC-BY-SA unless otherwise noted.