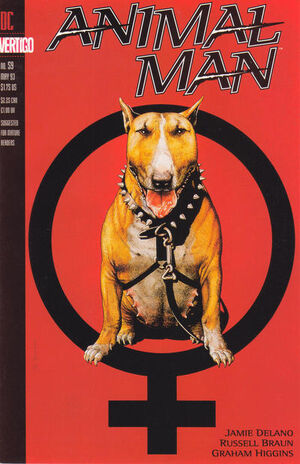 OK, OK, enough levity. Let's get down to mixing up our witches brew. I think I've got the recipe figured. First, we need a dash of something sweet--

After giving a negative ID on three Jane Does in a New York City morgue, Buddy Baker is even more determined to track down his wife Ellen, who has been missing for nearly two days. He had visited her friend Juliet, who admitted that Ellen fought with her husband Mike, but seemed to be hiding something. Buddy determines that he should talk to Mike. He uses dog senses to pick up Ellen's scent, and is excited when he thinks he's found her. Unfortunately, he only finds a woman wearing Ellen's coat, who claims to have bought it from good will. Their altercation comes to an end when the police arrive and arrest him.
Meanwhile, Ellen has been released from jail, and on her cellmate's urging, she returned to inform Juliet that she had turned Mike over to the police. Juliet is far from pleased to be free of Mike, reminding that her husband's mob connections will have him out before the day is out - and madder than ever. As if to prove her right, Mike calls, threatening Ellen's life. Juliet forces Ellen out the door, giving her twenty dollars, and advising her to find Buddy and go home as soon as possible.
Ellen takes a cab to the headquarters of an organization called the Sisters without Mercy, a group of lesbians and radical feminists who believe that men are base, stupid, and violent by nature. She goes reluctantly, on her cellmate Jaqueline's advice, just wanting a shower and shelter. She tells the ladies her story, and they are comforting and non-judgmental. Ellen uses their phone to call her mother, but her mother reveals that Mike has already called there, threatening that if she doesn't contact him by eight o'clock, he will visit her mother and children instead. Ellen tells her mother to take the kids to a neighbour's house for the night, as a precaution. The Sisters without Mercy offer their help.
Some of the Sisters are intent on killing Mike, but Ellen refuses on principle. Sarah, a lawyer, offers that they should find a way to scam him and get leverage on him. They have Ellen tell them everything she knows about Mike so they can form an appropriate plan. They come up with a profile on him that shows him as a sexist homophobic who compensates for sexual and cultural insecurity by abusing women. They form a plan that involves calling on the services of a call-girl named Honey.
Ellen lays the bait, calling Mike up, and claiming that she'll do anything to keep her family safe. She arranges to meet him at a hotel room. Later, he meets her there, and while his back is turned, she spikes his drink with something. She excuses herself to the bathroom briefly, but while she's inside, she sneaks out the window and trades places with Honey, who is made up to look like her.
The next morning, Mike finds a tape in his room which shows him putting a gun to Honey's head (thinking it is Ellen), and forcing her to perform sexual acts with him. However, beyond the initial interactions, Mike has little memory of what happened. As he watches the tape, he discovers that Honey is actually a male transvestite, and that he had engaged in several sex acts with him - and apparently enjoyed it. He is so disgusted that he vomits, and he worries that if the tape ever gets out, his mob family will kill him.
The Sisters without Mercy burst into the room along with Ellen and Honey, warning that they will release the tape if anything should happen to Ellen and her family. They threaten that if his mob connections don't kill him within 48 hours of the tape's release, they will. They leave him in the room, and escape, with Honey mocking him by calling him 'stud' as he closes the door behind them.
The girls return to their headquarters, and celebrate with drinks. Even so, Ellen has reservations about what they've done, feeling that there was something immoral about their actions - even if it felt like justice. They encourage her to celebrate for now, and worry tomorrow. Meanwhile, Buddy is locked away in a jail cell, howling for his lost love.

Retrieved from "https://heykidscomics.fandom.com/wiki/Animal_Man_Vol_1_59?oldid=1409344"
Community content is available under CC-BY-SA unless otherwise noted.