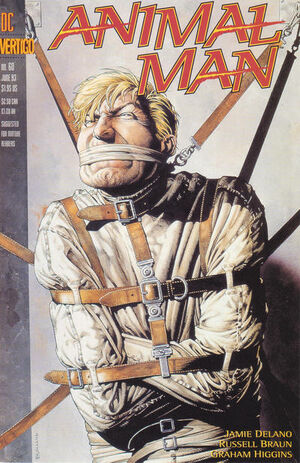 Hmmmm... Misfits. Misfits and freaks, people like us, are our best hope. Sports of nature, mutations-- that's where evolutionary change is sparked. Maybe we should build an ark, gather as many far-out weirdos on it as we can and wait for the deluge...

Buddy Baker's 'Animal Dreaming' continues as he dreams he's an alligator being taken into captivity. He wakes up in a jail cell, wrapped in a strait-jacket, realizing that just like the alligator, he has been restrained and sedated. Outside the cell, a New York City police officer comments that there are plans to have Buddy committed.
In Vermont, Ellen Baker is back home on the Frazier farm, almost relieved to see her kids Cliff and Maxine fighting. Despite herself, Ellen feels a little relaxed with Buddy away, though she doesn't know where he is. Her mother, who has only just started taking a liking to Buddy, expresses some concern for his safety, since he went to look for Ellen in New York.
Buddy is dragged away with his mouth taped shut, and put into the back of a van on the way to a facility for the mentally ill. A particularly large orderly is placed as a guard over Buddy, meaning that he'll have to be subtle in his escape plan. Buddy draws on the powers of a skunk, causing a foul odour to emanate from him, which sends the orderly running. Once alone, Buddy draws on the power of a snake to wriggle free of his strait-jacket. Then, naked, he simply flies away.
Still naked, Buddy knocks on the window of a christian call-centre, and begs to use the phone. He manages to get through to Cliff, and once establishing that Ellen is home and safe, he promises to return home as fast as he can fly there.
Ellen reveals what happened to her in New York to her mother, and she is horrified. She expresses regret that she allowed Ellen to travel to the city alone and without Buddy. they are interrupted by Maxine, who announces that Buddy will be returning momentarily. He soars overhead, and lands in front of his family; still nude, to Grandma Frazier's horror - and still smelling like skunk.
After having a bath and catching up to speed on what happened to Ellen, she gives him a present from Grandma Frazier. She tells him to put it on before dinner, or she'll be upset. The family waits eagerly downstairs to see Buddy in his present. Finally, he comes downstairs and it is revealed that Grandma Frazier made him a new Animal Man costume. Unfortunately, it doesn't fit very well. Grandma tells him to eat more, so he can fit it.

Retrieved from "https://heykidscomics.fandom.com/wiki/Animal_Man_Vol_1_60?oldid=1409345"
Community content is available under CC-BY-SA unless otherwise noted.