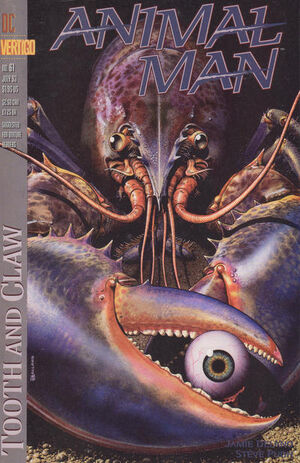 I don't know just what it was, Ellen. A sort of tension was building in me all day. I couldn't stop thinking about all the stupid, bad things we're doing to the planet--

Walt Isaacs fishes in Malecite Bay, but hasn't seen a fish or much of anything else all day. Suddenly, a tug on his line grows more and more intense until he has to let go of his rod. He has reeled in a number of lobsters. The lobsters appear to have some kind of malicious intent, though, and soon they swarm him and eat him alive.
Meanwhile, the Baker family is hoping to take a vacation in Malecite Bay, but they are stuck in traffic. Buddy Baker seems particularly restless and irritable, unable to set aside environmental concerns about all of the cars on the road. This dismays his wife Ellen, who has been hoping to get away from rants like this, and experience some kind of normalcy. Their daughter Maxine notifies them that she needs to go to the bathroom, and they decide to pull over somewhere for a breather.
Even at a nearby rest stop, Buddy's frustrations continue as his son Cliff plans to try to catch frogs. Buddy is disgusted to see another family at the rest stop dumping garbage out in the grass and having a very smokey barbecue. Without warning, he becomes like feral dog and chases the family away, leaping onto the hood of their car and beating at their roof with his fists. Ellen is mortified, but it's not just Buddy going nuts. A flock of seagulls has begun attacking Cliff, and Maxine reports that while she was in the bathroom, she was attacked by a pack of woodchucks. Rather than linger, the family decides to get on their way.
Annie Cassidy is an artist living with her daughter Lucy nearby Malecite Bay, and close to a natural rock formation known as the Indian-Head. As it turns out, the Bakers have rented out a cabin down in the bay below them, without realizing that the bay is so polluted that swimming would be inadvisable. Lucy reports that when she had gone down to the beach earlier, it had turned out that Walt Isaacs disappeared there, and has not been heard from since. Annie is strangely unsympathetic, and decides to take a hike up the Indian-Head, leaving Lucy alone.
The Bakers are a little disappointed with the condition that the cabin is in, but Ellen is happy enough to be close to the ocean. All of the Bakers are excited to swim, and Ellen puts on her suit right away. When Buddy starts getting frisky, she demands to know why he attacked the family back at the rest stop. He admits that whatever it was, it affected all of the animals. It was a feeling of strong negativity towards humans and their pollution. He tries to lift their spirits by dragging her to the beach for a swim, but when they get there they are disgusted to find Maxine carrying around used condoms that she found there.
Lucy appears, explaining that the water in Malecite Bay has been contaminated by chemical run-off from a plant up Goose Neck Creek. Buddy, Maxine, and Ellen decide to go for a boat ride out into the ocean, to get further from the polluted waters. Cliff obviously finds Lucy attractive, and decides to stay behind to hang out with her.
Annie, meanwhile, reflects on how the world is being destroyed, and how her daughter's future is at stake. She enters an old ruin within the Indian-Head, hoping to use its natural rhythm and calming effect to relax. She is obviously feeling some of the same rage that Buddy and the animals experienced earlier.
While out in their boat, Maxine notices some dolphins swimming by. As they get closer, though, the dolphins become aggressive, and destroy the boat.

Retrieved from "https://heykidscomics.fandom.com/wiki/Animal_Man_Vol_1_61?oldid=1409346"
Community content is available under CC-BY-SA unless otherwise noted.