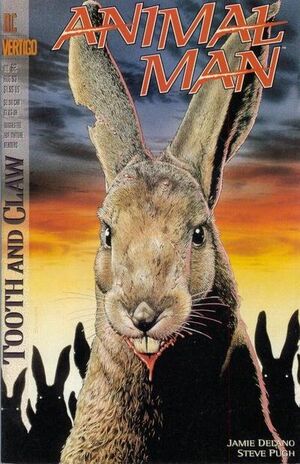 I am telling her the truth. There is still time for us all to come to our senses and start to clean up the mess we've made.

After his boat is attacked and destroyed by dolphins, Buddy Baker feels compelled to join them. He senses their desire to kill, and feels it too. Unfortunately, both his wife Ellen and his daughter Maxine are left in the water with no defence, and the dolphins begin to target them. Ellen pleas with Buddy to save Maxine, and it manages to bring him out of his trance. He realizes that the feelings of violent revenge that the dolphins are experiencing are human emotions, and not animal emotions. He uses the abilities of a shrimp to grab his wife and daughter and out-swim the dolphins back to shore.
Elsewhere, Cliff Baker and his new friend Lucy Cassidy hang out in the sand dunes on the beach. She offers to show him the rabbits, as they usually come out around evening time. They come across a large system of rabbit burrows, but the animals are timid. Suddenly, however, a rabbit comes out and rushes them, attacking Cliff. Moments later, they find themselves surrounded by hundreds of angry rabbits, and they are forced to run back to Lucy's trailer.
Lucy informs Cliff that her mother is an artist, and he looks at one of her paintings. The painting is a violent scene depicting various animals attacking and killing humans violently, all surrounding two large smokestacks from a chemical plant. The painting also features a large red tidal wave carrying a giant creature with it. Lucy's mother Annie appears, and resumes work on the painting, commenting that she will likely add the rabbits to it after she has finished painting dolphins into it.
Meanwhile, Buddy watches a news report about all of the recent animal attacks across the country. He starts plotting out the points on a map, and predicts that all of the occurrences are radiating from Malecite Bay - where they are. Ellen bitterly responds that Buddy is the most likely cause, and Buddy swallows his offence. Cliff returns home, and excitedly reports about Lucy's friendliness and Annie's interesting painting, but Buddy sends him to bed. Cliff is indignant and angry, grumbling that his father's doom-saying and constant restrictions are spoiling his fun. As he goes to sleep, Ellen sneaks in and tells him that she's glad he made a new friend. Cliff replies that they were all invited for dinner at the Cassidys' place, and Ellen is happy to accept the invitation.
At dinner, Annie becomes tipsy drinking Ellen's mother's wine. Annie reveals that her husband Ricky was put in prison for ten years after bombing the chemical plant upstream, hoping to stop its pollution. She tries to say more about it, but is distracted when she sees the silhouettes of Cliff and Lucy kissing inside the trailer. Later, the kids emerge, with plans to take a walk, and Annie is permissive. By now, Annie has the whole wine bottle to herself, and she rants about the state of the world and how humans are destroying the world and the future. Annie reveals that Lucy's life has already been shortened by pollution, having developed a rare form of leukemia. Her story of how she and Ricky failed to get any justice for what happened enrages Buddy.
Later that night, Ellen and Buddy lie in bed, and Ellen suggests that Annie may be involved in the animal attacks, citing her painting as evidence. Buddy responds that humans will likely destroy themselves in the future, and that something angry is coming soon, though he doesn't know what.

Retrieved from "https://heykidscomics.fandom.com/wiki/Animal_Man_Vol_1_62?oldid=1409347"
Community content is available under CC-BY-SA unless otherwise noted.