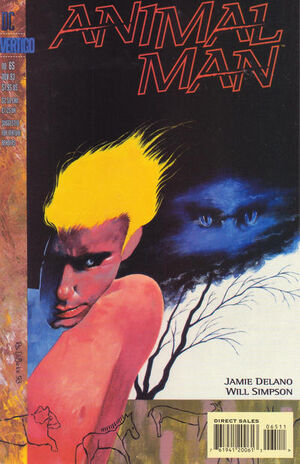 Everything happens at once. Creatures in infinite variety are giving birth, mating, defecating, ejaculating, fighting, eating, and dying. They're doing it constantly, endlessly... and they're doing it in my head. It's a pretty strange trip, I tellya.

While spending time in the forest with her husband Buddy, Ellen Baker becomes disturbed by the quiet she feels there. Buddy finds this amusing, given that he can hear the myriad of animal activities going on within 50 feet of that spot. Ellen expresses a desire to experience Buddy's connection to the lifeweb firsthand, which confuses him, given that in the past, she has seemed so disgusted with it. He attempts to describe it with words, but too much is lost in translation for her. Instead, she presses him to show her physically, by unleashing his animal side through sex. He is reluctant at first, but gives in when she insists.
Meanwhile, their son Cliff Baker and his girlfriend Lucy are hiding out in the barn. Cliff seems hesitant to let their romance get much more physical, and suggests that they go for a hike. Lucy explains that considering that she has leukemia, she feels that she needs to get more physical experience now, because she has less time to live. Cliff plays dumb until she comes straight out and asks him when they are going to have sex. He responds that while he wants to have sex, he has worries about pregnancy and STDs, and even with the use of condoms, he wouldn't really be ready for sex in any case. Despite his hesitancy, Lucy promises not to break up with him (unless she gets a better offer).
Elsewhere on the farm, Ellen's acquaintances from the Sisters Without Mercy, Myra and Selene, arrive with hopes for a place to stay. As they get out of the car, they notice a smell in the air which drives them to kiss passionately. They are caught by Maxine, who is confused by lesbianism, and sex in general. She agrees to lead them back to the farmhouse to meet her grandmother.
Ellen and Buddy have carnal, animal sex - experiencing The Red by engaging in a primal act. Afterwards, Ellen seems unsatisfied by the primal nature of animal sex, criticizing the lack of joy therein - the joy that comes of being human. They get dressed, and head home. Despite this, Buddy wonders if they might have a second go of it.
Outside the farmhouse, Buddy encounters his mother-in-law, Mary Frazier, who explains that she doesn't mind having all of these people staying in her home, and denies that she truly has ownership over the land. She suggests that Buddy needs some kind of guidance with regard to what he should do with this 'ark' he's creating there. She states that the strange smell that everyone has been noticing is the smell of God, and that she has met God on two occasions. In fact, she points to a point behind Buddy claiming that God is standing right there.

Retrieved from "https://heykidscomics.fandom.com/wiki/Animal_Man_Vol_1_65?oldid=1409350"
Community content is available under CC-BY-SA unless otherwise noted.