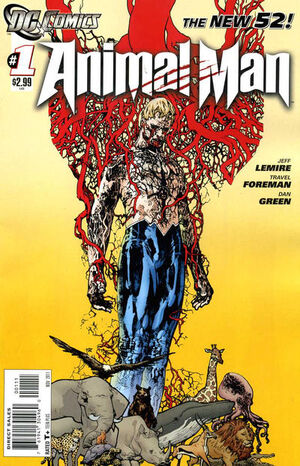 Appearing in "The Hunt, Part One: Warning from the Red"Edit

Buddy Baker has gone from "super" man to family man – but is he strong enough to hold his family together when Maxine, his young daughter, starts to manifest her own dangerous powers? Find out in this dramatic new series from writer Jeff Lemire (SWEET TOOTH) and artist Travel Foreman (The Immortal Iron Fist).

Retrieved from "https://heykidscomics.fandom.com/wiki/Animal_Man_Vol_2_1?oldid=1660160"
Community content is available under CC-BY-SA unless otherwise noted.