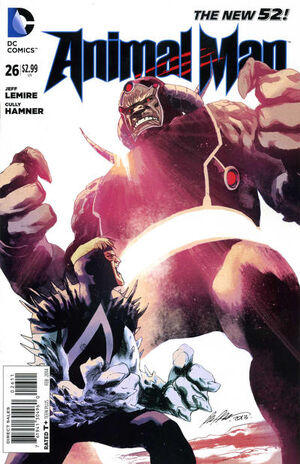 M-my family. I'm a father... a husband! I can't do this. I can't leave them to watch this damned planet! I won't leave them!

Unexpectedly, Animal Man has found himself on another planet, separated from the life-forms he would usually connect with through The Red on Earth. He and another creature are soon under attack by hostile natives to this strange planet, and they are forced to run for their lives. Safe in a cave, Buddy realizes that he can't communicate with his new companion, but their mutual need to survive is apparent, as a giant and monstrous humanoid alien seeks to kill them. Searching desperately for any life to latch on to - any power to borrow - As his companion is killed beside him, Buddy realizes that the answer was staring him in the face the whole time. He borrows the strengths of the creature that is tormenting them, and successfully knocks it to the ground.

From behind him, Buddy is surprised to hear a voice congratulating him on his resourcefulness. He turns to see an alien who introduces itself as The Bridgewalker, though he would not be able to pronounce its real name. She explains that he is known to her, as are all the others who were sent to this planet to die on this day. This is the "Seed Planet," and she brought avatars of the Red and The Green as candidates to replace her as Bridgewalker - and by surviving, he has been chosen to become her apprentice. Ignoring that, for the moment, Buddy wonders how there can be other, alien avatars when the Parliaments are located on earth. She comments, obliquely, that the Seed Planet is something unknown to even the Parliaments.

Thinking on his family, Buddy refuses outright. This makes her angry, as she warns that the Seed Planet is more important than his family or his earth. Even as her rage reaches its peak, she softens, realizing that Buddy's family is in danger. Before she pulled him away, she had sensed a dark presence in the Red. Though she is not long for this world, Buddy proposes that if she will send him back home and wait, he will return to take her place. She warns that if he makes this bargain, the moment she dies, he will be brought back, and there will be no more deals to be made. He must be true to his promise.

Before allowing him to leave, though, Bridgewalker insists that he consume something called the Godseed. The human body is not strong enough to carry the mantle of Bridgewalker, but the Godseed would allow Buddy to channel the power of the Red from across the galaxy. It will gradually cause him to evolve, and become something more than human. Once he consumes it, she insists that he hurry back and save his family.

Within moments, Buddy is falling into the Red, and the first thing he notices are the dead bodies of the totems, murdered by the renegade traitor who aided Brother Blood in his conquest. And now, Buddy has fallen into its clutches.

Retrieved from "https://heykidscomics.fandom.com/wiki/Animal_Man_Vol_2_26?oldid=1410630"
Community content is available under CC-BY-SA unless otherwise noted.