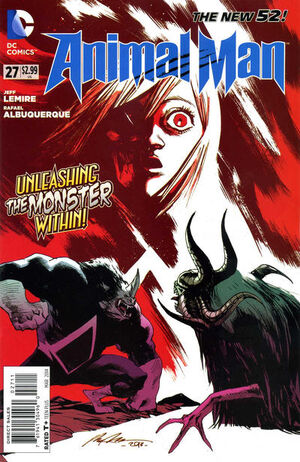 I'll gladly die 'fore I let you hurt a hair on her pretty little red head.

Since her estranged husband Buddy Baker disappeared on the very night he was honoured by the Hollywood Screen Awards, Ellen Frazier has been set upon by the paparazzi, making demanding and insensitive queries that drive her to tears. When one particularly insensitive reporter asks whether her children were even real, she loses her temper and punches him in the face.

Buddy, meanwhile, has arrived in The Red, where he learns with dismay that one of the Totems had killed the rest of the Parliament of Limbs as part of a plan to bestow the role of Avatar of the Red on Brother Blood instead of the Parliament's intended Maxine Baker; Buddy's daughter. Angrily, Buddy breaks free of the rogue Totem's grip, explaining that the Red's power doesn't belong to the totems exclusively. When he was transported to the Seed Planet, he became connected to an even greater variety of creatures than those on Earth - and their abilities are now his to command. And he has no qualms about using them to find his daughter.

Maxine's friends within the Red, meanwhile, have gathered together at the Mountains of Muscle to fight off Brother Blood's advance. Though they have little chance of winning, their stand may be enough time to let little Maxine and her cat Socks escape into the catacombs of the mountains until they reach the very edge of the Red - and from there, nobody knows what lies beyond. Maxine is reluctant to continue, though, knowing that if she leaves the Red, she will never be able to find her deceased brother Cliff's soul, and build a body for him. Sadly, Socks must admit that there is nothing she can do to bring Cliff back. She can only save herself - and he will do what little he can to ensure that she survives.

The Totem doubts Buddy's power, and Buddy warns that it is a mistake to do so. While villains always make speeches claiming victory before it's won, they always lose to him because they have nothing real to fight for. He, on the other hand, has a family to fight for, and nothing will stop him from preventing them from being hurt. Grimly, the Totem points out that Buddy's loyalty to his family is a weakness - and his bleeding heart has already failed them. Cliff was taken from him because of Buddy's hubris.

Unfortunately, Ellen's act of outrage landed her in a jail-cell for assault. Despite their agreement with her actions, the police must follow through on the charges pressed. An officer suggests that with Buddy missing and the paparazzi swarming outside, a jail-cell might be the safest place for Ellen right now.

Meanwhile, the inevitable confrontation between Shepherd's protectors and Brother Blood's troops begins, and Shepherd warns that he will gladly die to protect Maxine. Unfortunately, Maxine and Socks got lost in the catacombs, and have emerged back where they started - within grasping distance of Brother Blood, who seeks to kill her. Grinning, Brother Blood forces Shepherd to make good on his promise, thrusting his fist through the goat-man's chest, killing him. With tears in her eyes, Maxine cries out with horror.

With Buddy locked in battle with the rogue totem, Ellen trapped in jail, Shepherd dead, and Maxine at the mercy of Brother Blood, it appears that all is lost.

Retrieved from "https://heykidscomics.fandom.com/wiki/Animal_Man_Vol_2_27?oldid=1410631"
Community content is available under CC-BY-SA unless otherwise noted.