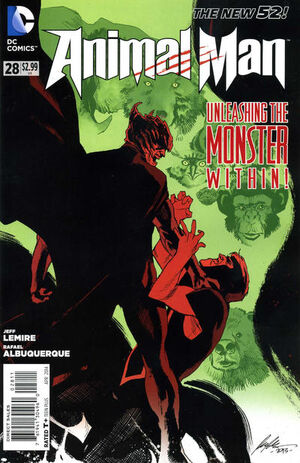 In The Red, Brother Blood has got Maxine Baker by the neck, demanding that she renounce her role as the intended Avatar of the Red, and allow him to drink in all of the power that resides there. He has already stabbed her friend and guardian Shepherd, who now weakly commands his pet crow to deliver a message before his wounds can get the better of him.

Maxine's father, Buddy, meanwhile, is battling the rogue Totem, who murdered the others. Despite Buddy's being bolstered by the life-webs of other planets, his resolve is being weakened by the Totem's taunting, claiming that he has destroyed his family and is unworthy of the role of Avatar. Angrily, Buddy responds that the totem doesn't know the first thing about family. Being a superhero and being the avatar mean nothing to him without his family. He knows, though, that so long as this sadistic totem remains alive, Maxine's life will be in danger - and that is how he justifies his decision to kill his opponent. He rips the horns from the Totem's head, and thrusts them into its chest, causing it to screech loudly, and collapse before him.

Relaxing, Buddy's attention is caught by the cawing of Shepherd's crow. It speaks with Shepherd's voice, warning that he is not long for this world, and Maxine is in danger. He managed to imbue some of his own remaining life-force on the crow, and hopefully, that will be enough to get Buddy to his daughter. The crow begins to glow with Shepherd's life force, growing several sizes; large enough for Buddy to climb onto its back.

As Shepherd coughs and sputters, Maxine cries out for him, causing Brother Blood to derisively warn that her friend is as good as dead - and so will her cat be, too, if she doesn't give her power up to him. Angrily, Maxine declares that she is Animal Girl, and uses the strength of a gorilla to throw him off of her. She kicks him in the gut with the force of a kangaroo's muscular legs, warning that he made a mistake in trying to invade her place of power.

She rushes to Shepherd's side, promising that he will survive this. Sighing, he responds that he never should have worried so much about her, given how powerful she has proven to be. In the moment of reprieve from Brother Blood's attacks, he warns that she must never give up all of her power to him. He can't beat her now, and he knows it - that's why he wants to convince her to give it up willingly. Maxine responds that she doesn't care about Brother Blood - she only cares about her friends. She sends some of her power into his body, and rebuilds his form from scratch, leaving his corpse to die as he is reborn, alive and well.

He is revived just in time to protect her from an attack by Brother Blood's Splinterfolk. Thinking they've won, they are upset to hear Brother Blood warn that he has one more card to play. He reaches up through the red, and drags Maxine's mother from her jail cell into the Red, and grabs her in a headlock. He warns that if Maxine doesn't renounce her place and give him her power, he will kill Ellen right in front of her. Ellen begs Maxine not to give up what he wants.

Arriving on the back of the crow, Buddy shouts out his agreement, and warns Brother Blood to get his hands off of his wife. Maxine tearfully explains that she used up most of her powers to save Shepherd, but Buddy explains that it was never her fight anyway; it was his. He launches himself at Brother Blood, full of righteous rage, and their collision causes an explosion of Red energy. Buddy recovers, and Shepherd helps him to his feet, explaining that Buddy was never alone in his fight. Soon, Brother Blood's weak form is surrounded by all of the friends that Buddy and Maxine made during their travels in the Red.

Maxine embraces her mother, apologizing for running away. She had only been searching for her dead brother - and she still wants him back. She wants them all back. In tears himself, Buddy hugs his daughter and wife to him, explaining that no matter what they do, Cliff is gone, but he will never leave her again.

Unfortunately, he made a deal to give up his family in exchange for the chance to save them, and the Bridgewalker intends to collect.

Retrieved from "https://heykidscomics.fandom.com/wiki/Animal_Man_Vol_2_28?oldid=1410632"
Community content is available under CC-BY-SA unless otherwise noted.