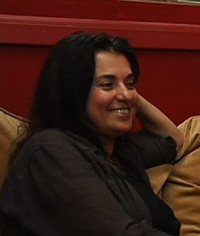 She was born in the borough of Manhattan.

Ann Nocenti is a writer and editor for Marvel Comics. She formerly worked as assistant editor to Howard Mackie and Larry Hama.

Retrieved from "https://heykidscomics.fandom.com/wiki/Ann_Nocenti?oldid=1525732"
Community content is available under CC-BY-SA unless otherwise noted.