Part of the 'Annihilation: Conquest' event 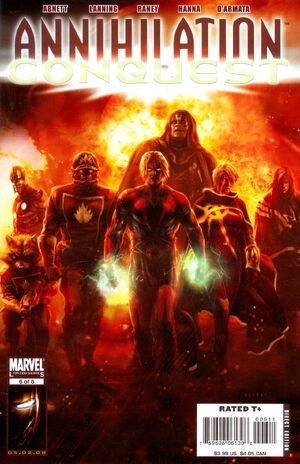 This is it: Marvel’s rag-tag group of sci-fi heroes vs. Ultron – in a double-sized finale! The surviving warriors face-off on the battlefield, with the fate of the entire Kree Empire – and perhaps the Earth itself – at stake! Who will fall? Who will rise to become a legend? It’s an extra helping of adventure, humor, drama and eye-candy that IGN.com calls “one of the best event books of the year.”

Retrieved from "https://heykidscomics.fandom.com/wiki/Annihilation:_Conquest_Vol_1_6?oldid=1749398"
Community content is available under CC-BY-SA unless otherwise noted.