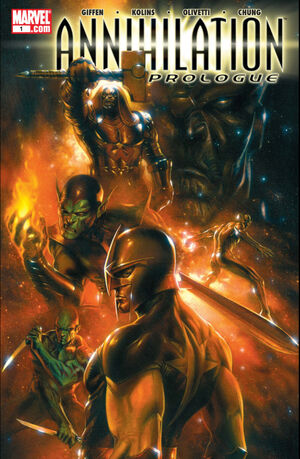 All serve Annihilus! Annihilus is the will and the way and he WILL NOT BE DENIED!

At the edge of the universe, Thanos and his companion Skreet meet with Death, in the form of a child, to experience something "wonderful."

At the Kyln moons near the Crunch, new prisoners are being brought in by the Omega Corps. Then suddenly, an unknown fleet of ships emerge from the Crunch and destroy Kyln.

On Xandar, news of Kyln's destruction reaches the Nova Corps, who go on high alert. Among the many Nova Centurions summoned, is Richard Rider of Earth. Just as the Corps was getting prepared, the unknown fleet ambushes the Corps. At the same Time, Drax the Destroyer and Cammi, escape from a Xandrian transport by hopping into an escape pod. In the midst of the fighting, a massive fireball is headed for Xandar's spaceport. Rider attempts to take one of his fellow Centurions, Samaya, to safety, dodging any fiery debris. Samaya tells him that if they survive, she will claim him as her mate. But as she says this, she is hit in the face by debris.. Rider eventually comes to and climb up to find the entire spaceport destroyed. Full of shock, Rider can only grieve for his lost comrades.

Annihilation Day, plus 15, on the fringes of Kree/Skrull space, Ronan the Accuser is taking two criminals into custody. However, a brigade of Kree soldiers surround him, declaring that he's under arrest.

On a Kree starbase, there is chatter about two Skrull systems going missing. Unknown to everyone on the station, Kl'rt the Super-Skrull is eavesdropping on them while invisible.

Meanwhile, the unknown fleet, now called the Annihilation Wave, has stopped. The leader of the Wave is revealed to be none other than Annihilus, lord of the Negative Zone.

Retrieved from "https://heykidscomics.fandom.com/wiki/Annihilation:_Prologue_Vol_1_1?oldid=1413027"
Community content is available under CC-BY-SA unless otherwise noted.