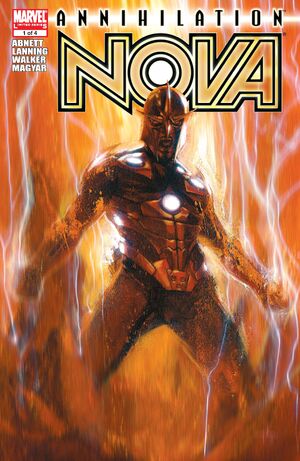 If I'm the only one left alive...who the hell is talking to me?

Appearing in "All For One"Edit

Synopsis for "All For One"Edit

Waking up on the destroyed surface of Xandar, Nova is contacted by a mysterious voice. Guided by the voice, Nova wanders the surface of the planetoid, eventually coming into contact with a few members of the Annihilation Wave. Angry over the destruction of his fellow Nova Corps members, Nova attempts to destroy them, barely surviving the encounter. Realizing he needs more power, he continues following the voice's commands to seek out the Xandarian Worldmind, eventually discovering his mystery benefactor, the Worldmind itself.

In order to save itself, the Nova Force, and the full history of the Xandarian people, the Worldmind informs Nova that he must download the Nova Force into himself. Nova objects to the suggestion, remembering what happened to the last Centurion who took on the whole of the Nova Force and went insane: Garthan Saal. The Worldmind promises to regulate the harmful effects. Despite his misgivings, Nova realizes he has no other options available, and takes on the power. Taking on the whole Force causes also causes his costume to change.

Feeling a rush from the immense power, Nova immediately sets out to destroy the Annihilation Wave, causing massive damage on the ships remaining in orbit around the destroyed Xandar before pushing himself too far and burning out. The act also brings him to the attention of Annihilus, who senses the use of immense power.

Crashing back to the planetoid, Nova almost gives into the grief he feels over being the final Nova until the arrival of Drax and Cammi gives him a purpose.

Retrieved from "https://heykidscomics.fandom.com/wiki/Annihilation_Nova_Vol_1_1?oldid=1515083"
Community content is available under CC-BY-SA unless otherwise noted.