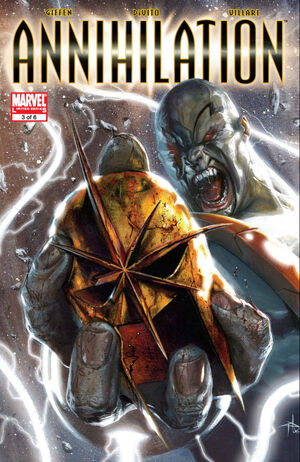 Three months, pan-galactic reckoning. Three months and the wave reaches your Earth. Even if your champions were capable of acting in unison... your world would still fall.

-- Ronan the Accuser talking to Nova.

Nova’s United Front is divided. Nova sets off on a desperate mission. Ronan heads to Hala to free the Kree race. And everyone else is just trying to survive! And what’s Drax’s secret agenda, anyway?

Retrieved from "https://heykidscomics.fandom.com/wiki/Annihilation_Vol_1_3?oldid=1410166"
Community content is available under CC-BY-SA unless otherwise noted.