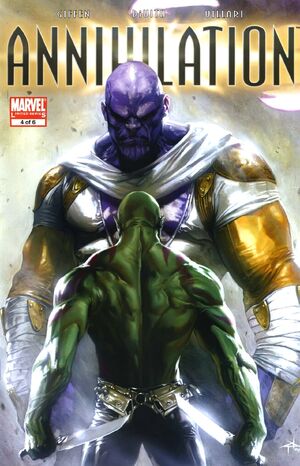 You've been monitoring the transmissions from Earth. You know what's going on down there. 'A house divided cannot stand.' WE had a United Front and look where it got us! They're split into warring factions down there...of no use to us, to ANYONE! It's as if they've forgotten how to be heroes!

-- Nova on Earth during the Civil War

Left behind, can Drax survive... Thanos takes action... and Nova sets course on a suicide mission. Bottom line, no Marvel Cosmic fan will forgive himself for missing THIS ISSUE!

Retrieved from "https://heykidscomics.fandom.com/wiki/Annihilation_Vol_1_4?oldid=1410168"
Community content is available under CC-BY-SA unless otherwise noted.