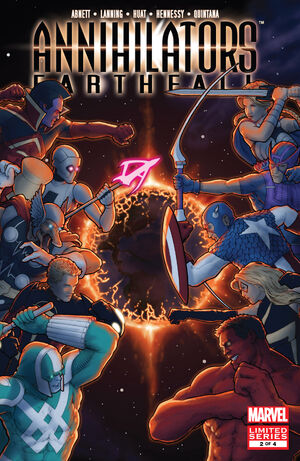 Synopsis for "batteries not included"Edit

Rocket & Groot find themselves staring at an empty compartment where a stardrive should be and questioning why they are hearing voices like suddenly their lives just got a narrator or something. Their ship blows up and they appear in space in combat space armor bewildered at what just happened and how they got there. They target their Badoon attackers forcing one of the pilots to eject. They squeeze into his craft and it begins to plummet to an ice planet below. Mojo calls for the scene to cut and hit the Bio-Stasis on his stars. He proceeds to plan for the next scene expecting to make enormous money on the show. In the background, Rocket's Timely Inc. Shipment Processing Device analyzes the situation and informs the duo they are caught up in an artificial dramatic construction. They blast through a wall realizing they are in a "Flarkin' TV Studio" and are confronted by a hologram of Mojo who opens fire with real weapons.

Retrieved from "https://heykidscomics.fandom.com/wiki/Annihilators:_Earthfall_Vol_1_2?oldid=1651099"
Community content is available under CC-BY-SA unless otherwise noted.