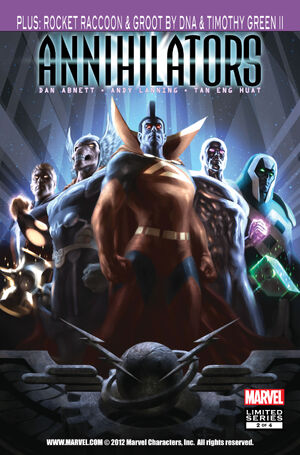 Ikon urges the Annihilators to stop Doctor Dredd. Quasar stops her from rashly rushing in when Dredd could cut the space around him. He tries containing Dredd in a quantum cage but he breaks free and cut open a hole in space and steps through. The Annihilators follow him through the tear, taking them to Galador, under siege by the Dire Wraiths. Beta Ray Bill and Quasar work together to block out the Black Sun which gives the Dire Wraiths their powers. Ronan the Accuser then faces off against Dredd, revealing that his Universal Weapon can effect matter transmutation and rearrangement, enabling him to negate his power to be touched.

Despite their victory, the Silver Surfer realizes that Dredd could not have engineered all this alone. He would need more than just the ability to cut space-time, but to also have been supplied with the necessary information regarding the Dark Nebula and its protection. He accuses Galador's Matriarch, Brandy Clark, of attempting to unleash the Dire Wraith so that it could give the Spaceknights a purpose once more. But he could guess that her grief and bereavement have rendered her vulnerable to outside manipulation. His answer reveals itself, or herself, as the Wraith Queen, who then begins to unleashed fury upon everyone.

Appearing in "There is Unrest in the Forest, There is Trouble with the Trees"Edit

Synopsis for "There is Unrest in the Forest, There is Trouble with the Trees"Edit

Rocket Raccoon has a speeder bike sent to him from a satellite in orbit of Planet X in order for him to rescue Groot from the Isle of Punishment. Unfortunately, the robotic guard birds aren't going to let him, proceeding to terminate Groot. Luckily, Groot spawn himself a new body from an small piece of himself. Just as the Timely Inc. analyzer reminds Rocket that they still have the guard birds to worry about, they are rescued by the Undergrowth Resistance, a collection of anthropomorphic animals, bugs and toadstools work for their rights against the Arbor Masters. Rocket then stands up to give an encouraging speech to the resistance for them to fight the injustice they live under. However, he soon discovers that the resistance only wants trivial rights, not outright revolution.

Rocket then laments to Groot all the failures that the Guardians of the Galaxy were unable to achieve. He then gets to the topic of why he came to Planet X, regarding the clown assassin made out of sentient wood. Groot tells him that the clown came from Halfworld, Rocket's home planet, which he doesn't remember much about. As Groot explains, whoever sent the assassin knew that they couldn't slip much past Timely Inc security, so they sent one of sentient wood to lure Rocket to Planet X, where a full hit squad could take him out easily. On cue, a clown hit squad does arrive, threatening to burn down the entire forest unless Rocket is given to them. Rocket, Groot and the Undergrowth Resistance managed to fight them off. Though the clowns are subdued, the fire is still raging. Therefore, Rocket sends an order to his satellite to fire chemicals into the upper atmosphere to create a monsoon to put out the fire. In gratitude, the Arbor Masters give Groot a full pardon.

But, rather than stay for the festivities, Rocket and Groot take the clowns' ambulance ship to go to Halfwoorld. Rocket then asks outloud why the clowns would drive such a ship. Groot tells him that Halfworld is a lunatic asylum; Rocket comments that he now knows why he blocked out so many memories.

Two days later, they arrive at Halfworld and enter one of the protective rings surrounding the planet. Rocket tries to hail out to anyone one the communicator, but one he mentions his name, a voice at the other end says that he shouldn't have come back, for now they'll have to kill him. Promptly, twenty-four fusion warheads are fired that the duo. The analyzers tells them they have two seconds to live.

The title of the 2nd story, There is Unrest in the Forest, There is Trouble with the Trees, is also a lyric from the Rush song The Trees.

Retrieved from "https://heykidscomics.fandom.com/wiki/Annihilators_Vol_1_2?oldid=1730842"
Community content is available under CC-BY-SA unless otherwise noted.