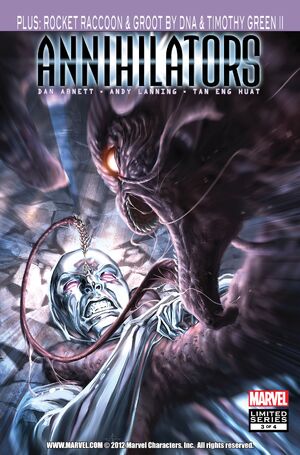 The most powerful super team ever—that’s right, we said it—faces the threat of the infamous Dire Wraiths! But can a squad that includes Silver Surfer, Gladiator and Beta-Ray Bill defeat this diabolical race and the dark magic they are unleashing? Meanwhile, Rocket Raccoon and Groot zoom deeper into their adventure as Rocket’s secret and slightly crazy origin is revealed!

24 fusion warheads are fired at Rocket Raccoon and Groot's ship. Luckily, they are able to escape via Timely Inc. teleportation system and into Halfworld. However, Rocket pauses when he recognizes many familiar faces, such Wal-Rus and Blackjack O'Hare. Suddenly, he is electrocuted by his ex-flame, Lylla and hooked up to a machine that unlocks his dormant memories. Rocket relearns of his past, in which he was chief of security in Halfworld. Halfworld was designed as an asylum, with anthropomorphic animal and clowns to be friendly and reassuring towards all of their patients. Everything was fine, until the day Barry Bauman aka Star-Thief, from Earth arrived. Star-Thief was a psychic who jumps from one body to the next. He caused chaos on Halfworld. To prevent him from escaping out into the galaxy, Rocket performed the greatest feat of all: he turns Halfworld into Star-Thief's greatest psychic prison with all its wardens as a combined biological key. To ensure that Star-Thief could never escape, Rocket had his memories of Halfworld wiped from his memory so that he could never be tempted to return.

Blackjack apologizes for firing on Rocket, having feared that Star-Thief must have lured him back to set him free. Though Rocket reassures his old friend that there's nothing to worry about, Blackjack informs him that Judson Hakes recently went amok and jettisoned some clowns into space. Rocket then puts together that Star-Thief must have had the clowns purposely ejected to lure him back. Everyone rushes to Judson's side, where he is hooked up to virtual reality and it turns out he was possessed, forcing Groot to kill him. They then find that Star-Thief's host body has been dead for some time. And worse, Star-Thief has possessed all of Halfworld.

Retrieved from "https://heykidscomics.fandom.com/wiki/Annihilators_Vol_1_3?oldid=1647430"
Community content is available under CC-BY-SA unless otherwise noted.